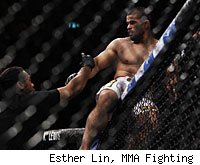 Rousimar Palhares did what everyone expected him to do at UFC 142: He grabbed hold of Mike Massenzio's leg and didn't let go until Massenzio tapped out.

Palhares is a brilliant Brazilian jiu jitsu practitioner who is widely regarded as having the best leg locks in MMA and he showed that off on Saturday night, forcing Massenzio to tap out to a heel hook just a minute into the first round.

"I'm super happy," Palhares said afterward, before dedicating the fight to a friend who recently died.

Palhares is now 14-3 in his MMA career, with 10 wins by submission, and five of those 10 submissions coming by heel hook. Palhares has found a move that he can execute as well as anyone, and he keeps going back to it.

Massenzio is a fine fighter, but he's not on Palhares' level, and this was an easy victory for Palhares. Massenzio falls to 13-6 in his MMA career, and it wouldn't be surprising if he's released by the UFC.

"That's a world-class athlete who was the better fighter tonight. I had the best camp of my career," Massenzio said after the fight. "I just got stuck. It wasn't my night. I'm really disappointed."

Palhares, however, has a lot of big fights left in the middleweight division. He's a threat to anyone -- especially when he locks onto your leg.