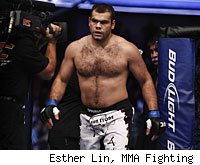 In the early going Oliveira appeared set to out-box Gonzaga. But a couple minutes into the first round Gonzaga picked Oliveira up and slammed him down, and once the fight was on the ground Gonzaga put his Brazilian jiu jitsu black belt to work: Gonzaga methodically went about taking Oliveira's back and wrapping his arms around Oliveira's neck for a rear-naked choke.

Once Gonzaga had the choke in, there was nothing left for Oliveira to do but tap the mat to end the fight. Gonzaga had won.

"It felt great to be back in the Octagon. I showed that I still have my BJJ skills in there tonight," Gonzaga said afterward. "My time away from the UFC was good for me. I dealt with some personal business in my life and came back refocused. Before, I was training well, but my mind just wasn't in it. Now, I'm back, I feel great. I'm focused and I showed that by beating a 13-0 fighter."

It was a solid performance by Gonzaga, who improves his overall MMA record to 13-6. After losing to Brendan Schaub in 2010, Gonzaga initially said he would retire from MMA. But it's good to see him back in the Octagon: He's still capable of fighting at a high level, even if Oliveira didn't give him much of a test.

As for Oliveira, who drops to 13-1-1, he's a fine young fighter, but not good enough on the ground to deal with someone of Gonzaga's skill level. He found that out the hard way.