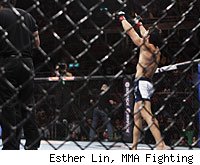 We have a major controversy at UFC 142.

Erick Silva, one of the most exciting young welterweights in mixed martial arts, was disqualified despite putting on a great show in his native Brazil because referee Mario Yamasaki ruled that Silva had landed illegal punches to the back of opponent Carlo Prater's head.

Silva swarmed on Prater from the opening bell, landing a hard knee at the start of the fight to knock Prater down and then pummeling Prater with hammer fists on the ground until Yamasaki had no choice but to step in and stop the fight after just 29 seconds. But while it looked like Silva would win by TKO, instead Yamasaki disqualified him.

Yamasaki was briefly interviewed by UFC announcer Joe Rogan after the fight, and Rogan was incensed, insisting that all of Silva's fights were legal. Yamasaki, however, insisted that Silva did hit Prater on the back of the head, and Yamasaki said that once he made his decision it was final.

"I had to decide right there and then. There's nothing I can do," Yamasaki said.

Silva showed a great deal of class after the fight and declined to criticize Yamasaki, even though he was obviously disappointed to have lost a fight he dominated.

Silva has now fought twice in the UFC, for a total of just 1 minute, 9 seconds. He made his UFC debut at UFC 134 and beat Luis Ramos by TKO in just 40 seconds. Technically, his record has now dropped to 13-2, but there's no question that Silva was the better fighter in the Octagon on Saturday night, even as he walks away with a disappointing loss.