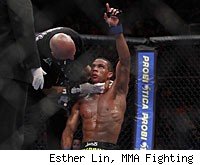 Edson Barboza is still undefeated, and he ran his record to a perfect 10-0 with an absolutely sensational knockout of Terry Etim at UFC 142.

After getting the better of Etim in the stand-up in the first and second rounds, Barboza put on a show in the third, with a spinning wheel kick that landed perfectly to Etim's chin and knocked him cold.

Etim was obviously out cold the instant the kick landed, and he fell straight backward onto the canvas.

The second round was more of the same: Barboza got the better of the striking exchanges, and when Etim managed to take Barboza down, Barboza popped right back up. Etim actually landed a couple of effective kicks in the second round, but Barboza was the one landing the harder kicks and following them with punches, and it was Barboza controlling the fight in the stand-up.

And then came the third, when Barboza had one of the greatest highlight-reel knockout kicks you'll ever see. It was a brilliant striking display from a great young fighter.

"When you fight in Brazil, it's unlike fighting in any other place in the world. In a fight, you try things and hope they work," Barboza said. "Tonight, it (the kick) worked. It's something I've practiced a lot and I finally was able to land it hard. I'm happy with this outcome and you can expect more of that soon."