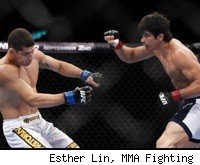 This is the UFC 142 live blog for Erick Silva vs. Carlo Prater, a welterweight bout on tonight's UFC pay-per-view from the HSBC Arena in Rio de Janeiro, Brazil.

Mario Yamasaki is the referee of this contest between two Brazilians.

Round 1: The two trade feints and it's Silva who steps through with a right hand that misses and a knee to the body that drops Prater. Silva finishes with hammerfists and the fight is stopped.

-- However, Silva is disqualified for illegal punches to the head.

The replay shows most of the punches connected legally on the side of the head. Joe Rogan interviews/interrogates Yamasaki and Yamasaki explains he made a judgement call at the moment. Tough call all around.