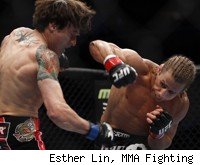 In the last edition of Fighter vs. Writer, Strikeforce champ Luke Rockhold proved that he knew what he was talking about when he said he couldn't understand why all the media picked Brock Lesnar at UFC 141, while the fighters favored Alistair Overeem. Lesson learned. Maybe.

For UFC 142, I turned to a man who knows a little something about both main event combatants: former WEC featherweight champ Urijah Faber.

Faber's gone up against Jose Aldo in the cage and Chad Mendes in practice, plus he's a pretty savvy all-around judge of character, so I expect another tough one as I look to rebound from my loss. But, just as in the UFC, there are no easy match-ups here. If there were, I would have sought them out by now, trust me.

Jose Aldo vs. Chad Mendes
Faber: Mendes via decision. "I think it'll be kind of a feeling out process at first, but then somebody's going to open up. I think it'll be an explosive first round and early second, but then Chad's going to start getting some takedowns and grinding Aldo. I think that's the big thing that people aren't thinking about it, is the fatigue of a grappling match. Chad will fatigue him and, if not finish him, then hopefully win a decision."
Fowlkes: Aldo via decision. I think it's going to be a closer fight than many people are expecting, but I just don't see Mendes being able to outwrestle Aldo for five rounds. The Brazilian is too quick and too athletic, and he'll have Mendes confused on the feet. Expect a close one, but also expect Aldo to get his hand raised at the end of the night/morning.

Vitor Belfort vs. Anthony Johnson
Faber: Johnson via TKO. I like Vitor, and I'm a longtime fan, but I think Anthony Johnson is going to be really good at that new weight class. I'm taking Anthony, but I'm cheering for Vitor.
Fowlkes: Johnson via decision. If he makes it through the first three minutes with Belfort, his chances improve greatly. Johnson's never been knocked out and he's got a solid ground game. If he's smart, he'll turn this into a grind and sap Belfort's explosive power.

Mike Massenzio vs. Rousimar Palhares
Faber: Nobody. It's always a risky move, but it's worked for others. Faber has declined to pick a winner here on the grounds that "I don't really know too much about either of those guys. Under the Fighter vs. Writer unified rules, he only scores here if the bout ends in a draw or a no contest. Or if if doesn't happen at all, for whatever reason. Does Urijah know something we don't?
Fowlkes: Palhares via submission. Due to past experiences, it always makes me uneasy when fighters refuse to pick. If there's anyone on this card who might do something weird that results in a no contest -- or just not show up at all -- it's Palhares. Still, when he has his act together he's a very tough opponent for anyone, and my money's on him to submit Massenzio.

Carlo Prater vs. Erick Silva
Faber: Prater via decision. "I know Prater, so I guess I'll go with him just because I'm more familiar with him." It's unclear if Faber realized he was going with the heavy underdog in this match-up, but name recognition still counts for something, I suppose.
Fowlkes: Silva via TKO. Prater's been around, it's true. But most of the known guys he's fought ended up beating him, while Silva is a bright young prospect that the UFC's pretty hot on. I don't see him doing anything to screw that up here.

Edson Barboza vs. Terry Etim
Faber: Etim via TKO. "I'm going to go with Terry. He's got really great striking and some good finishes if it goes to the ground, so I think he'll have the edge."
Fowlkes: Barboza via decision. I still think Etim's a good underdog pick, given the 2-1 odds, but this looks like a close fight that's likely to go to decision. If it does, Barboza's active, flashy style should wow the judges enough to earn the nod. Having the crowd on his side won't hurt, either.