Vitor Belfort Eyes the Coming End to His Time in the Cage, Vows to 'Enjoy the Moment' 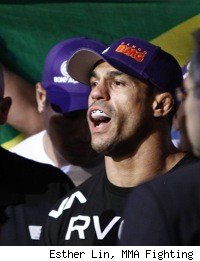 When I asked Vitor Belfort what he thought it would feel like to walk out in front of a screaming crowd of his countrymen in Rio's HSBC Arena for UFC 142 in the wee hours of Sunday morning, he described it in one word: intense.

"I do my best no matter where I'm at, but I know that crowd's going to be the loudest crowd ever," Belfort said. "I'm going to enjoy the moment. It's a party every time I step in that Octagon. It's party time. The hard work is done and it's time to do what you do every day in the gym. Of course, you have only one chance, so you have to enjoy the moment."

And yet I admit that, based on what I've learned of fighterspeak over the years, something in that statement set off alarms in my head. Not only did Belfort say he was going to 'enjoy the moment' twice in the span of about six sentences, he went on to use that exact same phrase at least half a dozen more times in the less than ten minutes we spent on the phone.

For a normal person, maybe that means nothing. But a fighter? In my experience, once they stop talking about their obsessive desire to win and perform and become a champion, and they start talking about enjoying each passing moment of fight week, it usually means they're thinking about hanging it up soon. It made me wonder: is Vitor Belfort closing in on retirement? Is that even possible?

Belfort is a little like the anti-Wanderlei Silva in some ways. With Silva, you think about his long, memorable career and look at his weathered face -- even after plastic surgery, it remains a rugged timeline of his experiences in the fight game -- and you can't believe he's only 35 years old. Then you look at Belfort, who still looks fresh and eager and in possession of roughly the same facial symmetry he started with, and it's hard to believe he's actually 34.

At the same time, it makes sense. They came up more or less as contemporaries. When they faced off at UFC Brazil in 1998, they were both 5-1 as professionals. But in the intervening years it seems like Silva's lived several brutal lifetimes, while Belfort's best days have seemed always just in front of him, like a hill he never quite seems to crest.

When I spoke to him in the Copacabana Palace Hotel the last time the UFC was in Rio, he was fresh off a knockout of Yoshihiro Akiyama and all he could talk about was getting another shot at middleweight champ Anderson Silva. When I mentioned that it might be tough to do, considering how recently he'd been beaten by the champ, he just shook his head intently as his young son hammered one overhand right after another into his father's gut in an attempt to get the old man's attention.

"I'll do it," Belfort said confidently. "I'll do whatever I have to do."

But this time, just a couple days away from a fight with Anthony Johnson, which -- win or lose -- will lead him straight into an Ultimate Fighter coaching gig opposite his old friend Wanderlei, Belfort struck a very different tone.

Maybe it's the weight-cut talking. Maybe it's too many phone interviews lined up back to back to back to back. Maybe it's just something he says when he's not sure what else to say. But when I put it to Belfort straight and asked him if all this 'enjoy the moment' talk meant he was looking at his career and wondering how many such moments were left in it, he didn't shoot me down. Far from it.

At first, it still seems hard to believe. When you think of the guys who might need to hang it up soon, Belfort's name doesn't spring to mind. He still looks good in the cage, can still take and deliver a punch with the best of them. But the years are the years and the numbers are the numbers. The bout with Johnson will be his 30th professional MMA fight in a more than fifteen-year career. Almost all of that time has been spent at the sport's highest level, against top-tier opponents. Surely, that takes its toll whether we see it etched into a man's face or not.

But when you're still as competitive as he is is well into your mid-thirties, I asked him, how do you know when it's time?

For those of us who were teenagers ourselves back when Belfort got his start as the blistering 19-year-old who knocked people out in a matter of seconds -- back when he was "The Phenom," who eventually gave way to the talented, but not quite dominant middle-aged fighter -- it's strange to think that he must now be closer to the end than the beginning.

But then, that time comes for every fighter. The time when you start actively trying to enjoy these fleeting moments as a pro fighter because you realize there's only a finite number of them left.