Outside the Lines Hits UFC on Fighter Pay, Dana White Vows to Hit Back 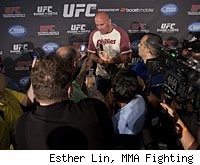 ESPN's Outside the Lines will air an investigation into the payment for UFC fighters on Sunday morning that already has UFC President Dana White steamed, even before he's seen the report in full.

A portion of the Outside the Lines segment is available at ESPN.com, along with an article headlined, "UFC fighters say low pay simply brutal." White wasn't pleased with that, and he wrote on Twitter on Thursday that he'll have a public response to the show after it airs. He added that his people also taped ESPN's interview with UFC co-owner Lorenzo Fertitta, and that the UFC will show fans the complete, un-edited interview.

ESPN wasn't able to get any active UFC fighters to complain about their pay on the record, and the only former fighter quoted on the record criticizing the UFC is Ken Shamrock, who has lost legal battles with the promotion. So the report is lacking any fighters who can specifically document how they've been treated unfairly by the UFC.

However, some of the numbers presented both on the Outside the Lines broadcast and in the accompanying ESPN.com report don't seem to add up. For instance, the report refers to the median pay of UFC fighters as between $17,000 and $23,000 a year, and yet an unnamed "Fighter X" who is quoted as saying, "I'm in the middle tier of fighters," reveals that he has made as much as $80,000 in a year. If a middle-tier fighter makes $80,000, then the claim that the median pay of UFC fighters is $17,000 to $23,000 a year is bogus.


And even though it is true that some UFC fighters make less than $10,000 a fight, those are the largely interchangeable fighters who fill up the bottom of the undercard on UFC shows. Those fighters would be comparable to NFL practice squad players, who are sometimes signed for as little as a week at a time and paid as little as $5,700 for their week on an NFL team.

The Outside the Lines piece also would have benefited from exploring what has happened to rival promotions that have paid fighters more money than the UFC pays. The most notable example is the clothing company Affliction, which made a splash as an MMA promoter by signing several high-profile fighters to contracts that paid them significantly more money than they could make in the UFC. Affliction, however, went belly-up after promoting just two events.

So while it may be true that some low-paid fighters consider the UFC's pay scale to be "brutal," the UFC's business model is also the only one that has proven to be a viable way for MMA fighters to remain employed and for an MMA promotion to remain in business.

Outside the Lines is a well-respected show that often stirs up important debates inside the sports world. We'll see with Sunday's episode what kind of debate about fighter pay begins. And what kind of response White offers.

UPDATE: After MMAFighting.com published this, ESPN.com changed its story to say that the $17,000 to $23,000 median income is per fight, rather than per year.