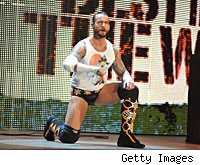 WWE champion CM Punk will not escort Chael Sonnen to the Octagon prior to Sonnen's fight against Mark Munoz on Jan. 28, after all.

Punk confirmed with MMAFighting.com that WWE chairman Vince McMahon decided against allowing him to walk out to the cage with Sonnen later this month. MMA reporter FrontRowBrian first reported the news Friday afternoon.

The Punk/Sonnen pairing created a major buzz in both the MMA and professional wrestling world when it was first reported, but most assumed it was UFC president Dana White who would be against the idea of a pro wrestler walking out to the cage with a top fighter on FOX, not McMahon.

UFC on FOX, headlined by Rashad Evans vs. Phil Davis, returns on Jan. 28 from the United Center in Chicago. Sonnen vs. Munoz will serve as the co-main event.