When It Comes to Chad Mendes and Jose Aldo, Outside Opinions Make Tempers Flare 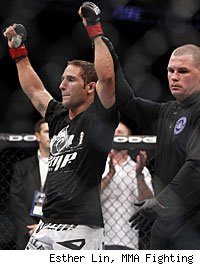 This is how easy these things start in the fight business. These minor beefs. These subtle slights that fighters carry with them like childhood insults that are still fresh in their minds decades later. Once I started talking to the various parties involved in the UFC 142 main event for a Sports Illustrated article this week, I heard about it from all of them. Once they start, these things take on a life of their own.

How this story starts is, Gray Maynard gets to know Jose Aldo at UFC 136 and they get to talking. Maynard likes him. More than he expected to, really, since it turns out "he's actually a really humble guy." Since Maynard has already left his longtime home at Xtreme Couture in Las Vegas by this point, he figures maybe it's time to do some traveling, learn some new stuff. Spending the winter in Brazil (where it's summer) working out with Aldo and the Nova Unaio team sounds fun, right?

"So I contacted [Aldo's manager] Ed Soares, just kind of threw it out there," Maynard said. "I didn't know if they'd take me up on it, but a couple days later [Soares] called me back and said he'd love to have me down there. A couple days later I was on a flight, basically put everything on hold and flew down there."

So far, so good. But as long as he was going to be helping Aldo prepare for fellow wrestler Chad Mendes, Maynard figured he might as well take a look at some fight footage of Mendes on his long flight to South America. Here's where it gets tricky.

"The first time I trained with Jose, I told the guy, 'Hey, on the flight down here the tapes I watched [on Mendes], you seem a little more comfortable in the Octagon. I don't know if he's quite ready,'" Maynard said. "It's not a knock on him. He's the top guy to [challenge for the title]. It's just that Jose's on top of his game."

It was a sincere opinion, Maynard said, so when people asked him what he thought of the upcoming fight, that's what he told them: Mendes isn't ready. Not surprisingly, this didn't please Mendes when he heard it.

"Honestly, I don't know why Gray's even talking about me," he said. "Gray's never trained with me. He has no idea what I feel like in there. Obviously, he's training with Jose, so if he gets asked that question I guess that's what he thinks he's got to say, but honestly, Gray's style of wrestling is completely different from mine. I'm more of an explosive, blast you off your feet kind of wrestler. He's more like a bully that just gets you up against the cage and works takedowns and slams from there."

"Since when are the two best guys in the weight class not ready to fight each other? That's an absurd thing to say. But whatever. Who cares what [Maynard] thinks? Chad's going to go in there and fight and win."

But now that Maynard's taken some heat from the Team Alpha Male crew for his comments, he's not at all ready to back away from them. If anything, he's only more committed to his original assessment, he said, because now he knows just how good Aldo is.

"From watching the tapes, that's how I felt, that [Mendes] wasn't ready. But actually training with Jose, I feel it even more now," Maynard said. "For me, helping out Jose doesn't mean I want Chad to lose or I came here to make that happen. It's just a matter of helping out Jose, and now that I've been here, that's what I think is going to happen. I only know Chad a little bit, and I think he's a tough kid, but Jose is really tough. I couldn't believe it. I was seriously impressed. ...I knew he could strike. I knew that. What I didn't know is, man, he's tough to take down. And the kind of athlete he is, the way he applies that, it's amazing. He can take a punch, too."

But as fight night approaches, these outside opinions tend to diminish in importance. Soon enough it'll be just Mendes and Aldo in the cage, and then it won't matter what anyone else says. When it gets to that point, however, Mendes has something that Aldo doesn't, which is the benefit of a former opponent's experience. Faber went five brutal rounds with Aldo, and learned some hard lessons that he's passed on to his protege, he said.

For instance, there's the issue of Aldo's leg kicks.

"The one thing I didn't take into account was, I knew the leg kicks were going to hurt, but I didn't know how disarming they would be," Faber said. "As far as leg kicks in practice, when your legs gets kicked a couple times and it starts to hurt, you don't keep wanting to get kicked in it all day. You heal it up and put ice on it so you can train the next day. But in a fight like that, you have to know that kicks like that will do damage and you have to honor that. You can't just tell yourself that you're going to take the pain and do what you want to do. You have to avoid them and make him pay when he tries it."

Aldo shredded Faber's thighs with kicks early on, effectively taking away Faber's ability to shoot for a takedown in the later rounds. He took criticism for it after the fight, but even Mendes can't say it was unwarranted.

"That's something even Urijah talked about," he said. "He doesn't have that explosive shot the way I do. A lot of his takedowns come off of punches, using that snap single-leg or something. Aldo took that away from him with those leg kicks, and by that point it was too late."

And that -- the fact that not all wrestlers and/or wrestling styles are created equal -- is why Mendes doesn't worry about Maynard's assessment of him or Maynard's training with Aldo, he said. There are wrestlers and then there are wrestlers, and just because you've seen one in the gym doesn't mean you know what it's like to fight another in the cage on Saturday night.

"We don't know how much [Maynard's work with Aldo] is going to help him, but we'll get in there and see," Mendes said. "It doesn't matter to me. I've been wrestling since I was five years old, and I've never taken a year off. It's something I've done my whole life. For him to bring a wrestler in to work with for one camp, his wrestling's not going to be anywhere near mine."

With Mendes' predictions, just as with Maynard's and Faber's, we'll know soon enough who had it right.