Kenny Florian May Retire From the UFC Due to Back Injury 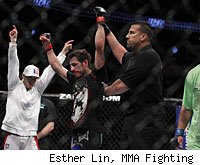 Kenny Florian's mixed martial arts career may have come to an end.

The 35-year-old Florian, who three times fought for a UFC belt, told the Boston Herald that a herniated disc in his lower back could prevent him from ever fighting again. Two doctors, one an orthopedist and one a neurologist, have told him that quitting MMA would be the wisest course of action.

"It's possible, unfortunately," Florian said. "I've kind of been going back-and-forth with some of the doctors, so it's possible. I'm going to see. As of right now, obviously I can't compete and train like I was at all. I'm just kind of doing what I can and hoping that things heal up and get better. I'm just kind of in a holding pattern. That's why I decided to do this commentary for the time being and take this next six months to really heal up and try to make some money on the side. It sucks. The last couple of months I've just been figuring out what's going on and what I'm going to do."

Florian last fought on October 8, losing to featherweight champion Jose Aldo. There was some talk immediately following that fight that Florian could retire, but at that time Florian said he still wanted to compete, likely back at lightweight.

However, things changed when Florian suffered a back injury while lifting weights in November. Florian says he has been dealing with tingling and numbness in his right leg since then.

If there's any silver lining for Florian, it's that he has started to build a second career in broadcasting. In other sports, it's common for former athletes to get jobs as announcers after they walk away but in MMA, where broadcasting jobs are scarce, Florian could become something of a trailblazer. He's a natural on television, and the UFC's new deal to put shows on Fox, FX and Fuel means there are more opportunities available for former fighters to make a living behind the microphone.

"It's not good," Florian told the Herald. "That's why I'm trying to stay hopeful. We'll see. I've been out here in (Los Angeles) doing this show every week for UFC Tonight for Fuel TV and doing some other things. I'm just hoping that it can heal up and get better and then see if I can go back to doing what I was doing. So far, I still need to rest. If I go to do something physical, I'm just not able to do it. That pain is coming back."

If Florian is done, he'll leave MMA with a career record of 14-6, including 12-5 in the UFC. Only 10 fighters in UFC history have more career wins than Florian.