Jose Aldo Ready to Defend Title in Middle of Night 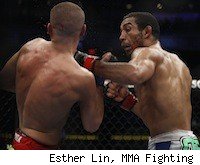 The UFC 142 pay-per-view will air in its usual 10 p.m. ET time slot in North America, which means the main card will only begin at 1 a.m. BRST local time in Rio de Janeiro.

That also means that by the time Jose Aldo and Chad Mendes step into the cage for their UFC featherweight title fight, it could be as late as 3:30 a.m. BRST. The unusual schedule shouldn't be too much of a problem for the challenger Mendes, who arrived in Brazil on Tuesday, and who trains out of Sacramento, Calif., where it will be approximately 9:30 p.m. PST by the time the fight gets underway.

It may affect the champion Aldo, who lives and trains in Brazil. However, Aldo quickly put those concerns to rest on a recent conference, saying he trained in the middle of the night to get his body ready to fight at that hour.

"It all comes down to being well-trained and being prepared to step in there on fight night."

When the UFC last visited Brazil in August the time difference wasn't so great. But since North American clocks were turned back an hour in November, signaling the end of Daylight Savings time, and Brazilian clocks were turned forward an hour in anticipation of their summer season, it created a greater time difference between Brazil and North America.