Fighting in Brazil Again, Vitor Belfort Thrilled With How Far MMA Has Come 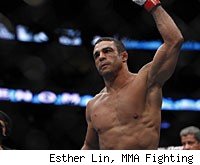 Vitor Belfort's first UFC fight came at what may have been the promotion's lowest moment. So he takes particular joy in seeing how far the UFC has come.

Belfort, who has been in the UFC longer than any other active fighter, is preparing to fight back home in Brazil on Saturday at UFC 142. But as he discussed the upcoming fight on Thursday, he also remembered his very first fight in the UFC, which came at a time when the entire sport of MMA was on the verge of collapse.

That would be UFC 12 on Feb. 7, 1997. At the age of 19, Belfort was an entrant in the four-man heavyweight tournament originally scheduled to take place that night in New York. But as politicians began to speak out against what they viewed as a savage bloodsport, the New York government told the UFC it was no longer welcome in its state, and the UFC had to scramble to move the event to Alabama at the last minute.

"My first fight, we had to travel all night to Alabama," Belfort said. "We could only fight in Alabama. It was my first UFC. And then after so much investment they were able to remove that stigma in the U.S. and we slowly won over different countries."

Winning over different countries included Brazil, where Belfort said it hasn't always been easy. Although MMA traces its origins to Brazil, the sport has also faced some of the same opposition there that it has faced in the United States. Belfort, who beat Wanderlei Silva at UFC Brazil in 1998 but hasn't fought back home since then, said it's been a struggle to get people back home to accept that mixed martial arts is a legitimate sporting competition, not a violent spectacle.

"We really had to be pioneers, here in Brazil especially," Belfort said.

Belfort said it used to frustrate him when people thought that because he fights professionally for a living, that meant he must also be a thug who gets involved in street fights. He said that in the early days of the UFC, people would ask him if anyone who ran into him in the street should fear him, not understanding that for him, fighting is just a job.

"I remember my first interview they asked me, 'If someone crashes into your car, what would you do?' I stopped and thought, 'If they crash into Pavarotti's car, does he have to sing an opera?' So people have prejudice against fighting," Belfort said.

Now the UFC has reached the point where it can sell thousands of tickets for a major event in Brazil, and Belfort says he believes Brazilians have come to understand what MMA is all about.

"The sport was born in this country and it's been difficult to gain acceptance, but we actually overcame this hurdle," Belfort said. "The sport has a lot to teach people. Martial arts is about physical and moral respect. . . . In martial arts we have this balance. So if someone crashes into my car I will come out of the car, get their license plate and talk about the damage and who has to pay. People relate our sport to aggression and it's not that at all. It's a contact sport but we respect each other greatly and we don't use it outside of the sport."

Belfort said that he's thrilled to see how many people across his home country are enjoying the UFC.

"Children, the elderly, families, women can understand our sport," Belfort said. "There's a lot for our sport to offer."