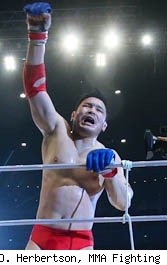 You know that pair of red Speedos in your closet that you always think about wearing? Well, it's time to dust them off because they're your ticket to free MMA shows for life.

ProElite's head of fight operations T. Jay Thompson announced on Twitter recently that any fan who shows up to the organization's Jan. 21 event in Hawaii wearing red trunks will receive free ProElite tickets for life. Yes, for life.

Of course, the publicity stunt is in honor of headliner Ikuhisa Minowa, who's famous for fighting in plain, red trunks.

"It's fun," Thompson told MMAFighting.com. "I'd like to think I'm being innovative, but I'm a fan of promoters like Bill Veeck and P.T. Barnum. I like promoters that don't take life too seriously."

ProElite 3, headlined by Kendall Grove vs. "Minowaman," airs live on HDNet on Jan. 21 from the Neal Blaisdell Center in Honolulu, HI. Below is a promo clip for the event.