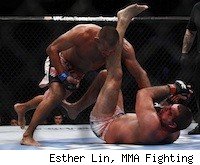 Dan Henderson has decided to wait until after the Rashad Evans vs. Phil Davis fight on Jan. 28 to plan his next move.

On Wednesday's episode of Clinch Gear Radio on SiriusXM, Henderson explained why he turned down a fight against Antonio Rogerio Nogueira recently, which was reported on Tuesday's edition of UFC Tonight on FUEL TV.

"I was under the impression that [UFC President Dana White] still kind of was on the fence whether he was going to put me in front of Rashad or not, that's assuming Rashad wins," Henderson said. "[White] did offer me a fight with 'Little Nogueira.' I didn't think the fans would be interested in that fight, and not as much time as I would like to prepare for a five-round fight. So I told him I would wait to see what happened with the Rashad fight. I would like to fight Jones now rather than if I took that fight with 'Little Nog,' it wouldn't be fighting Jones until another eight-nine months.

"It would have kept me active right now, but I'm okay waiting a little bit. We'll see what happens with the Rashad fight and go from there."

White told UFC Tonight that if Evans beat Davis on Jan. 28, he would be the No. 1 light heavyweight contender. The winner of Henderson vs. Nogueira would then fight the winner of Jones vs. Evans. However, if Davis beat Evans, the UFC would then decide between Henderson and Davis as the No. 1 contender.

And while Henderson ultimately turned down the Nogueira fight, he did admit to being open to the idea of fighting the Brazilian, if the fight were only scheduled for three rounds.

"It was more about having the time to prepare. I did inquire and said, 'Hey, I would be interested in doing it if it was a three-round fight.' I could have time to prepare for that."

The UFC has since booked Nogueira vs. Alexander Gustafsson at UFC Sweden on April 14.