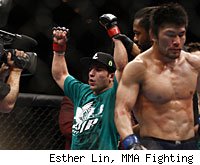 The UFC 142 fight card is designed to get the fans in Rio de Janeiro worked up to support the local guys, with eight fights featuring Brazilians against foreigners, including local fan favorites taking on American challengers in the main event and co-main event.

But those two Americans, Chad Mendes and Anthony Johnson, said on Thursday morning at the pre-fight press conference in Rio that they've had purely positive experiences from the Brazilian fans they've met, and they're being treated more like guests than rivals.

Mendes described the open workout on Wednesday in front of Brazilian fans on a Rio beach as one of the best experiences of his life, and he said that while he knows his opponent, UFC featherweight champion Jose Aldo, will have a lot of fans in the HSBC Arena, he doesn't worry about what the fans might say.

"I'm probably going to get booed," Mendes said. "It's here in Jose's backyard and he's the champion. But other than boos, I can't speak Portugeuse so I can't understand what anyone's saying anyway. I'm going to be in the zone and ready to get in there and do what I do."

Mendes said being away from home hasn't diminished his confidence.

"I feel great," Mendes said. "I'm basically treating this like it's any other fight, whether it's in Brazil or it's in the United States. I have tunnel vision, I have that goal of winning that belt. That's something I've trained for and it's all I'm thinking about."

And Johnson said he views the opportunity to step into the Octagon with Belfort as a big step in his career.