Anthony Johnson: My Strategy Is Called 'Get It Done' 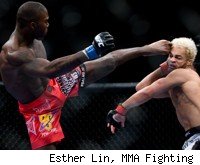 Anthony Johnson's strategy (if you want to call it that) against Vitor Belfort is quite simple at UFC 142 this Saturday in Rio de Janeiro, Brazil.

"I'm going in there to do me. And that's to fight," Johnson said Thursday during the UFC 142 pre-fight press conference. "There's no strategy. My strategy is to fight and that's what I get paid to do and that's what I'm here to do. So as far as strategy, it's called: get it done."

Johnson projected an air of confidence in front of reporters heading into his middleweight debut against the former UFC light heavyweight champion.

He spoke of gaining extra motivation after watching the "Countdown to UFC 142" preview show upon hearing Belfort say, "We're going to see a lion." Johnson was reminded of something his grandfather once told him.

"I'm looking forward to seeing that lion, actually," Johnson said. "Before my granddad died, a week before he died, he told me, 'Fight like you're fighting a lion across the cage from you.'

"That's all he had to tell me really before he passed," Johnson continued. "For me to not care and do the best I can in life. With Vitor saying that made me want to fight even more. I'm hungry too. I'm looking forward to the fight. I can't wait. I definitely can't wait.

Belfort (20-9) is known as one of the most devastating punchers in UFC history. He joined the UFC at UFC 12, stopping two opponents in one night. 15 years later, Belfort hasn't slowed down. He's coming off a KO finish against Yoshihiro Akiyama last August at UFC 133.

Johnson (10-3) is a knockout artist himself, having recorded five knockouts in his six UFC wins. His only losses inside the Octagon have been due to an injury and a pair of rear-naked chokes.

Last year Johnson made a switch to Imperial Athletics in Boca Raton, Fla. to train under Mike Van Arsdale with the likes of Rashad Evans and Jorge Santiago. From the look of things, the move has already paid off. Last October, Johnson ended Charlie Brenneman's night with a first-round head-kick knockout.

Training with a new camp and fighting at a new weight class, Johnson on Saturday will aim to establish himself against one of the future Hall of Famers in the sport.

"Vitor is an amazing athlete, very hands and very powerful. You have no choice but to respect him. I respect him but I'm not afraid of him. I'm willing to accept the challenge."