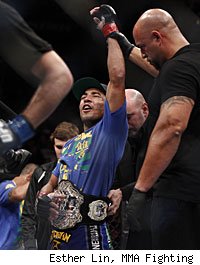 Will Jose Aldo continue to run roughshod over the featherweight division? Or will Chad Mendes pull off a huge upset in Aldo's homeland? Will Anthony Johnson look even more powerful now that he's not killing himself to cut down to welterweight? Or will Vitor Belfort's patented power punches put Johnson to sleep? Will any of the favored Brazilians lose in front of the fans in Rio?

I'll attempt to answer those questions and more as I predict the winners at UFC 142 below.

When: Saturday, the FX preliminary card begins at 8 p.m. ET and the main card begins on pay-per-view at 10 p.m. ET.

José Aldo vs. Chad Mendes
The undefeated Mendes has talked in recent weeks about how he's sure he has the right game plan for Aldo, and about how he has the best wrestling credentials of anyone Aldo has ever fought, and he's coming into this fight with a lot of confidence. And if you look at the fight from a certain point of view, you can see where that confidence comes from: Mendes has, after all, used that superior wrestling to take decisions from some pretty good opponents, and even though this will be Mendes' first five-round fight, he may have a cardio edge over Aldo.

But that's my analysis when I'm trying to look for a reason to think Mendes could win. The hard truth for Mendes is that while he's a better wrestler than anyone Aldo has ever fought before, Aldo is a much, much, much better striker than anyone Mendes has ever fought before. Aldo has become more cautious and tentative in recent fights, and so I'm not expecting to see the kind of devastating knockout that the Aldo of 2008-2009 could be counted on to provide. But I am expecting Aldo to employ leg kicks to keep Mendes at distance, perhaps some knees when Mendes shoots for takedowns, and enough punches to bloody Mendes's face. This fight should be another good opportunity for Aldo to show that he's hands down the best featherweight in MMA.
Pick: Aldo

Vitor Belfort vs. Anthony Johnson
Johnson's decision to move up to middleweight is long overdue -- while fighting at welterweight he twice came in more than five pounds over. So will he look better now that he's fighting in a division where he can actually make weight comfortably? I think he will, but I'm not sure how much of a difference that makes because I see this fight as being more about Belfort's power than Johnson's.

Belfort has had five fights since moving down to middleweight in 2008, and in four of them he knocked his opponent cold with punches. In the fifth, he got knocked cold himself by Anderson Silva's front kick. Johnson certainly has the ability to land a head kick and knock Belfort out with it, but I see Belfort catching Johnson with his hands down and knocking him out.
Pick: Belfort

Rousimar Palhares vs. Mike Massenzio
Massenzio is a good wrestler and a Brazilian jiu jitsu black belt, and he's coming off a solid win over Steve Cantwell at UFC 136. But he's not even close to Palhares' level on the ground, and I'll be surprised if this fight doesn't end with Palhares cranking on Massenzio's leg, and Massenzio tapping.
Pick: Palhares

Erick Silva vs. Carlo Prater
Silva made his UFC debut at the last Rio show and needed just 40 seconds to knock out Luis Ramos. Prater, who's finally making his UFC debut 40 fights into his MMA career, has a good chin and won't be knocked out as quickly as Ramos was. But Prater took this fight on short notice and really isn't on the same level as Silva, and it would be shocking if Silva doesn't win this fight handily.
Pick: Silva

Edson Barboza vs. Terry Etim
Barboza has built up a 9-0 record without ever really being tested on the ground, and Etim has a very dangerous submission game (he's won the Submission of the Night bonus in each of his last three wins). So if he can get this fight to the ground, Etim may just be the first person to beat Barboza. But Barboza is such a lethal striker that I expect him to hurt Etim badly standing up.
Pick: Barboza