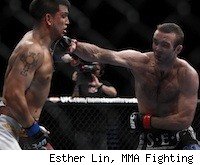 UFC lightweight Jacob Volkmann was on his way to coach wrestling practice at White Bear Lake High School in Minnesota last week when the school's athletic director called him in for an impromptu meeting. If he didn't know where this was headed based on past experience, he probably should have.

In early 2011, Volkmann was placed on administrative leave from his job as an assistant wrestling coach at White Bear Lake High School after telling MMA Fighting's Ariel Helwani that he wanted to fight President Barack Obama in his next bout because "someone's got to knock some sense into that idiot."

Following his most recent bout -- a unanimous decision win over Efrain Escudero at UFC 141 in December -- he again veered into political commentary in his post-fight remarks, this time telling UFC color commentator Joe Rogan that he wanted Obama to call him about scheduling a "glass-ectomy," which, according to Volkmann, "is when you cut your belly button out and put a piece of glass in there so when you have your head up your butt you can see where you're going."

Once again, White Bear Lake High administrators were not amused. And once again, Volkmann was placed on paid administrative leave. But this time, he told MMA Fighting, he thought he had followed the rules that school officials had given him, thanks to some intentionally clever wording.

"They gave me four rules to follow, and I thought I followed them," said Volkmann. "The first was, you've got to be respectful of people when you do your interviews, which is very vague. The second was, no interviews on school property. The third was, no White Bear Lake clothes during interviews, which is easy to follow. And the fourth was, I can't tell people to go attack the [White Bear Lake High School Athletic Director] or the human resources lady, which is kind of a foolish rule."


The way Volkmann saw it, the athletic director was wrong to accuse him of offering to give Obama a glass-ectomy.

"I said 'Call me so we can schedule a glass-ectomy.' Not saying for him, not saying for who. ...I was trying to cover my butt. I purposely did that," he said.

It apparently made little difference to school officials, who told Volkmann he'd be placed on administrative leave while they investigated the matter and decided what to do next.

For Volkmann, it's just the latest chapter in the strange pseudo-political tale that's come to define the last year of his MMA career. He's become the guy fans know not so much for his fights, but for his statements afterward. The clip of his initial callout of Obama landed on "The Tonight Show," and he was even visited by the Secret Service. He's chosen to run with the attention, wearing a "Volkmann for President" t-shirt down to the cage and carving out time in his post-fight interviews to take shots at President Obama. And for those who don't like politics mixed in with their sports?

"Too bad," Volkmann said. "This is working, so I'm going to stick with it."

But yet again Volkmann is finding that what works as an attention-getting routine in the UFC doesn't always go over so well with his employers at a public high school, even if the two are entirely separate in his mind.

"The thing with my coaching job is, I don't teach the kids politics; I teach them wrestling," he said. "I do my best to teach them what I can with wrestling. And they don't understand, I need to do and say what I can to get fans. Sometimes you have to say some kind of weird stuff to get people to notice you. Because you only have, what, 30 seconds out there with Joe Rogan? I have to say what I can in that 30 seconds to try and get people interested so they'll look me up afterwards to figure out why I was saying it."

Once you actually sit down and talk to him, however, it becomes clear that Volkmann's anti-Obama routine isn't just schtick. Ask him what, exactly, he dislikes about our current president, and he gives a heavy sigh before asking, "You ready?"

The tone itself tells you that you might as well get comfortable.

From the Obama administration's mortgage refinancing policy to health care reform to government grants for green energy, Volkmann can hold court on any number of political topics, and he can even tell you how he was personally affected by many of those issues as a homeowner, a chiropractor, and Minnesotan. His political views aren't limited to just jokes and quips, in other words, so why not make those the centerpiece of his public persona, rather than vaguely threatening statements that only earn him visits from the Secret Service and headaches at his coaching job?

Because, Volkmann explained, substantive political statements aren't known for captivating the attention of the average sports fan. And that is, after all, the goal.

"I think I did it the right way, because who cares if I have a problem with a policy? That would have never made any news."

You have to admit that he has a point. Clever sound bytes always get more airtime than policy discussion, and his way has generated its share of headlines so far. Of course, it's also generated some problems, as his current predicament demonstrates.

The last time he was put on administrative leave from his coaching job, he said, it was over in a couple of weeks. This time he hopes to be back in the wrestling room even sooner, but school officials have given him no timeframe for a decision. In the meantime, he can't have any contact with the wrestlers he coaches -- not even to explain to them in his own words why he can't be at practice. Sure, he still gets paid, but with a yearly assistant coach's salary of $1,800, the job was never about money to begin with.

"I don't make very much," said Volkmann. "I do it more to give back to wrestling. I had so many coaches who helped me out, so I figured maybe this is a good way for me to give back and help some other kids out."

Only now that he can't do that -- and now that his political views are threatening to overshadow his fighting ability in the eyes of many fans -- even Volkmann thinks it might be time to give it a rest.

"To be honest, I'm probably not going to bring it up again unless Joe Rogan does, because it's kind of like beating a dead horse at this point. I kind of made a comedy thing of it...and it's kind of getting old."

Then again, if someone puts a political question to him directly, Volkmann admitted, "I'm going to be honest, no matter what."