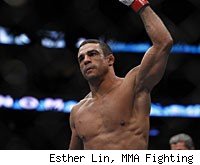 The UFC's first pay-per-view offering of 2012 goes down this Saturday night, and it also kicks off a brand new television era for the organization.

FX will air a large portion of the UFC 142 prelims leading up to the pay-per-view, which kicks off at 10 pm ET. Facebook will also air a fight from the card on Saturday night.

Plus, when the entire event is over, a one-hour post-fight show will air live on FUEL TV.

UFC 142 will mark the organization's second trip to Brazil in less than five months. The event will be held, once again, at the HSBC Arena in Rio de Janeiro.

Below is a breakdown of where all the fights will air: