Paulo Thiago vs. Siyar Bahadurzada, Others Official for UFC Sweden 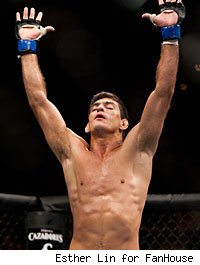 Both Thiago and Bahadurzada were originally scheduled to compete in separate bouts at UFC 142, until they both pulled out due to injuries. Thiago dislocated his elbow, while Bahadurzada broke his right hand in training.

Thiago (14-3) snapped a two-fight losing streak when he defeated David Mitchell via unanimous decision at UFC 134 in August.

Also officially announced for the card was DaMarques Johnson vs. John Maguire, Cyrille Diabate vs. Jörgen Kruth and Francis Carmont vs. Magnus Cedenblad.

UFC Sweden will air live in North America on Fuel TV. The event will take place at the Ericsson Globe Arena in Stockholm, Sweden.