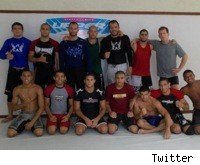 By the time he's done in Brazil, Gray Maynard will have spent a little more than three weeks helping Jose Aldo, the UFC featherweight champion, prepare for his next title defense against Chad Mendes at UFC 142 on Jan. 14.

And while it seems like a no-brainer for Aldo to train with Maynard for this fight, considering Maynard is built very much like Mendes, the idea was actually Maynard's, not the champ's.

"I've talked to him backstage at the UFC's and [the UFC 136] press conference in Houston," Maynard told MMAFighting.com recently. "[He] really seemed like a humble, nice guy. So, I wanted to reach out to him to help."

Maynard has trained with some of the best fighters in the world at Xtreme Couture in Las Vegas, and more recently at the American Kickboxing Academy in San Jose, Calif., but he believes Aldo may top them all.

"I knew he was good, but I had no idea he was as good as he is in every area. Really unbelievable, especially his takedown defense. That goes for all of Nova Uniao [Aldo's home gym] also.

"He's really one of the most, if not the most complete fighter I've ever worked with."

Maynard is coming off a UFC lightweight title loss to Frankie Edgar at UFC 136 in Houston. The loss marked the first of his career. Since then, he's been a bit of a nomad, training at different gyms across the world. He said he is "still in the process of moving" gyms but did not commit to a new home just yet. He's also still waiting to finalize his next fight, which is expected to take place in the first quarter of 2012.

Interestingly enough, Maynard, who was complimentary of Mendes' skills, believes "Money" isn't quite ready to fight someone like Aldo, even though Mendes is getting his first title shot in his 12th pro fight, while Maynard fought for the UFC 155-pound title in just his 11th pro fight.

"I think Mendes is a tough kid, but I think its too early for him to fight Jose Aldo."

UFC 142, headlined by Aldo vs. Mendes, airs live on pay-per-view from the HSBC Arena in Rio de Janeiro, Brazil.