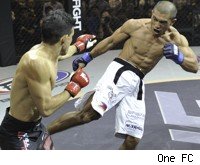 Filipino featherweight Eric Kelly's background is in striking, but you wouldn't guess it from looking at his MMA record.

As Kelly heads into his co-headlining bout against Shooto veteran Bae Young Kwon (6-2) at One FC 2 on Feb. 11 in Indonesia, Kelly is carrying a 6-0 record in MMA all by submission.

Kelly wanted to showcase his standup last September at the inaugural One FC card in Singapore, but his opponent Mitch Chilson turned the fight into a grappling exchange. And so, Kelly recorded his fifth first-round rear-naked choke win of his career.

"People think I am only a ground fighter because all my wins are by submission but I like fighting standing up as well," Kelly said to MMAFighting.com Tuesday.

Born and raised in the Philippines, Kelly started training boxing at 19 after graduating high school and then further developed his standup game by studying the Filipino kickboxing art "Yaw-Yan."


"All I know that Yaw-Yan is like kickboxing and Yaw-Yan originated in Philippines, I have also trained in Pencak Silat (Indonesia self-defense style) and done some boxing," Kelly said. "I first started out as a boxer because I left school and I didn't have a lot of money and it was a good option for me but I only did one boxing match which I won."

Kelly's journey in martial arts next led him to Wushu and San Shou. From 2001-2004, Kelly competed for the Phillippine's Wushu and San Shou team and his experience was highlighted by a Southeast Asian Games Gold medal in Wushu.

It wasn't until an injury directed Kelly to take a break from his striking to begin training jiu-jitsu. MMA soon followed and he began his competitive MMA career fighting for the Phillippines-based MMA promotion URCC. In his fifth appearance for URCC, he won the company's featherweight title and landed a deal with One FC, a fledgling Singapore-based promotion.

One FC, which aims to revitalize the Asian MMA industry, draws fighters from all around the world, allowing Kelly to challenge himself against competition outside of the Philippines. At One FC 2, Kelly meets Kwon of South Korea in a battle of prospects. Kelly admits he feels the extra pressure of fighting under international exposure, but he knows this is what he needs to realize his goal of fighting for the UFC.

"I have never been in an MMA event as big as One FC before, there were so many people at my fight and to hear them cheering for me made me know I must win the fight for them," he said of his One FC debut. "I am honored to fight for One FC and to have everyone in Asia see me fight but to fight for the UFC is my dream. I hope one day it can come true."