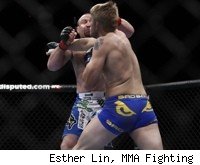 "Sweden has been on our radar for a long time and on April 14, we're excited to finally bring the UFC to Stockholm," UFC President Dana White stated Tuesday. "We're putting together a great card for the Swedish fans. I can't wait to get there in April!"

Gustafsson (13-1) has been on a tear, finishing all four of his opponents in his last four UFC fights. Last month at UFC 141, Gustafsson earned the biggest win of his career, a first-round TKO over veteran Vladimir Matyushenko. Nogueira (20-5) last month snapped a two-fight losing streak by stopping former champ Tito Ortiz at UFC 140 in Canada.

Since this is not a pay-per-view card, Gustafsson vs. Nogueira will be a three-round fight.

The current UFC Sweden matchups are below.