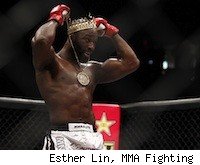 Referee Kim Winslow received a fair share of criticism for her work at Saturday night's Strikeforce event in Las Vegas, most notably from Muhammed Lawal, but Nevada State Athletic Commission executive director Keith Kizer did not feel the criticism was warranted.

"I had no issues with the stoppage," Kizer wrote to MMAFighting.com on Monday when asked for a response to Lawal's post-fight comments about the referee.

Lawal felt Winslow stopped his fight against Lorenz Larkin very late, which could have led to Larkin getting seriously injured.

"The commission," Lawal said at the post-fight press conference, "they need to do something with (Winslow). Let her take a fight or something and give her a bad ref. Let her fight Cyborg or something. Let her fight 'Cyborg' and then let's do a late stoppage of her. Because I watched her almost get Jan Finney killed by 'Cyborg.' I think the tables need to be turned. Put me in there as a ref and I'll just do a terrible job like her."

In a June 2009 interview, Winslow, who has never competed in a professional or amateur MMA fight, told MMAFighting.com that her professional background was as an air-traffic controller, but she had trained in "multiple "styles" of martial arts.

Watch Lawal discuss his issues with Winslow below (6:00 mark).