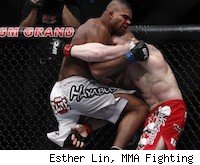 Every fighter on the card, except for Jon Fitch, was tested. The news is especially significant considering Alistair Overeem was tested twice on fight week and passed both times. Overeem also passed the test he took in London prior to flying to Vegas, which was asked of him by the commission after he failed to meet their out-of-competition drug test requirements in November.

In a December hearing, which saw the NSAC grant Overeem a conditional license until he passed the drug test in London, the commission also announced that they will reserve the right to test Overeem one more time within the next six months.

According to Kizer, Fitch wasn't tested because, "that fight (Hendricks vs. Fitch) was a winner only."

Below is a list of all the fighters tested at UFC 141: