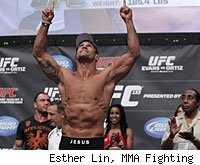 The first international season of The Ultimate Fighter will be available on American television.

UFC President Dana White said on ESPN 1100 in Las Vegas that although the UFC isn't ready to make an official announcement yet, the upcoming season of The Ultimate Fighter Brazil is slated to air on Fuel TV, which White hailed as one example of why the UFC's new television deal with fights on Fox, FX and Fuel is a major plus for UFC fans.

"The UFC has so much content that even Spike, if you look at what a huge percentage of their content we used to be, we still needed more," White said. "The Ultimate Fighter Brazil will air on Fuel TV. All this unique content that we're doing in other parts of the world, Fuel TV is going to take. I've been saying for the last six months, if you're a UFC fan and you really love the UFC, it's impossible not to have Fuel."

It's not yet known whether the Brazilian season of the UFC's reality show will be taped in advance, as past seasons have been, or whether fights will be shown live, as the upcoming season of The Ultimate Fighter on FX will be.

The UFC has announced that Wanderlei Silva and Vitor Belfort will coach against each other on the Brazilian reality show and then fight against each other at the end of the season, and the Brazilian season will conclude with a live Ultimate Fighter Finale, just as the American show always has. And American fans will be able to watch it all, if they're in the minority of households that have Fuel TV.