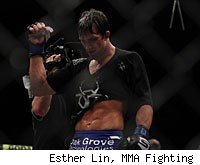 Although Jardine was a game opponent, the heavily favored Rockhold had little trouble, winning the fight just 4 minutes, 26 seconds into the first round.

"It means a lot," Rockhold said afterward. "Fighting a guy like Keith Jardine, he's a proven opponent, he's tough and he came to fight."

More Coverage: Rockhold vs. Jardine Results | Latest Strikeforce News
Rockhold looked good in the early going, landing a hard right hand to Jardine's head and then a switch kick to Jardine's body. The round turned into a bit of a brawl from there, with both men swinging wildly and not always landing. But as the round wore on, Rockhold was landing the harder punches, staggering Jardine.

And then came the ending: Rockhold knocked Jardine down with a right hand to the chin, battered him on the ground and appeared to have him finished before Jardine got back to his feet for an instant -- just long enough for Rockhold to knock him down again and land even more punches on the ground, with referee Herb Dean seeming a bit late stepping in to stop the fight. There was no question that Jardine was out.

The loss was disappointing but not surprising for Jardine, a UFC veteran who is a few years past his prime. For Rockhold, the win was impressive, but it raises questions about what's left for him in the Strikeforce middleweight division. Rockhold said afterward that he wants Zuffa to bring over a UFC fighter for him to fight. That's a good idea -- and it needs to be someone better than Jardine.