Jon Jones Itching to Fight, So Dan Henderson May Be Next 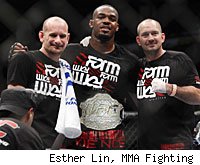 Dan Henderson may have leapfrogged Rashad Evans as the No. 1 contender in the UFC light heavyweight division.

With champion Jon Jones now saying that he wants to fight as soon as he can -- changing his mind after previously saying he needed some time off following a very busy 2011 -- it appears likely that Henderson will get the next crack at the champion, and Evans' quest for the belt will have to wait.

UFC President Dana White said on ESPN 1100 in Las Vegas that Jones had called him and said he's hoping to get back into the Octagon as soon as possible. Evans is already booked for a January 28 fight on Fox against Phil Davis, so Henderson may get the next title fight.

"He had said he wanted to take some time off (but) he called about four days ago and said, 'OK, let's go. ... Let's get back to work. I'm ready to get productive again,'" White said of Jones. "He wants to fight as soon as possible."

Based on the UFC's calendar, as soon as possible would likely be UFC 145, on March 24 in Montreal. That fight still needs a main event, and Jones vs. Henderson would be a big one.

"We've got to see how this thing plays out but what could end up happening is Dan Henderson fights Jon Jones first," White said.

But some would say it would be unfair to Evans: A former light heavyweight champion, Evans has been waiting for a title shot and wants to fight Jones, his former friend and teammate. The UFC has promoted Evans vs. Davis as the opportunity for Evans to earn his shot at Jones, but if the UFC wants to book Jones in the first quarter of 2012, then Evans is going to have to wait.

One way or another, White said, the light heavyweight division has plenty of challengers who can contend for Jones's belt. If Henderson gets the next shot, that just means the winner of the Evans vs. Davis fight would be first in line to face the winner of Jones vs. Henderson.

"I think we have a ton of guys," White said. "It's not like everything depends on one guy or two guys. The great thing about us is we've got 10 of 15 guys so it's never like we have to depend on one person."