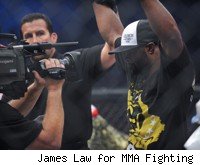 Tyron Woodley is a perfect 10-0 in his MMA career.

Woodley defeated Jordan Mein by split decision at Saturday night's Strikeforce event, winning his tenth fight in much the same way he has won his last couple of fights: He used his superior wrestling to control the fight for 15 minutes, and got booed afterward by fans who didn't find the fight entertaining enough.

It was surprising that one judge scored the fight 29-28 for Mein, who drops to 23-8. The other two judges scored it 30-27 and 29-28 for Woodley, who said he would like to fight for the Strikeforce welterweight title.

"I should be fighting for the title next," Woodley said.

Although Mein landed some hard punches in the early going, Woodley did exactly what he wanted to do in the first round, taking Mein down and controlling him on the ground. Woodley had a good first round.

The second round was similar, in the sense that Woodley took Mein down and stayed on top of him, although this time Mein was much more active from his back, landing elbows from the bottom and at least attempting to do some damage.

At the start of the third round Mein threw a kick, and Woodley made him pay for it, catching Mein's leg and planting him on his back. Woodley stayed on top on the ground for most of the round and although they did get back to their feet at the end of the round, Woodley clinched with Mein and remained in control. It was an easy decision win for Woodley, even if one judge didn't see it that way.