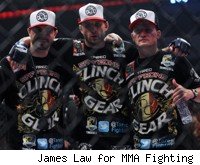 The win improves Saffiedine's professional MMA record to 12-3, while Stinson falls to 22-8.

Stinson hit Saffiedine with an elbow that bloodied up his right eye in the first round, and after that he battered him with punches, with Saffiedine unable to see Stinson's left hand coming because there was blood in his right eye. It was a good first round for Stinson.

Saffiedine had a better second round, getting on top of Stinson in the early going and staying on top, landing some hard punches from inside Stinson's guard and generally looking to be in control of the fight. It was a good second round for Saffiedine.

The third round got off to a bad start as Saffiedine kicked Stinson in the groin, causing a lengthy delay. As soon as that delay was over, Saffiedine exploded for a takedown and put Stinson on his back, and that's where he stayed for about four minutes before Stinson finally got back up. By that point, however, Saffiedine had controlled the round enough to win the decision.