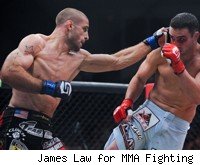 This is the Strikeforce live blog for Tarec Saffiedine vs. Tyler Stinson, a welterweight bout on tonight's Strikeforce on Showtime event from the Joint at the Hard Rock Hotel & Casino in Las Vegas.

Saffiedine (11-3) out of Team Quest is coming off a decision win over Scott Smith last July. At the same event, Stinson (22-7) made an immediate impact in his Strikeforce debut when he scored a 15-second knockout over respected veteran Eduardo Pamplona.

The live blog is below.
More Coverage: Rockhold vs. Jardine Results | Latest Strikeforce News
Round 1: Stinson with his five-inch reach advantage stalks Saffiedine. Saffiedine remains light on his feet as he looks for an opening. Saffiedine, switching into a southpaw stance, lands a nice inside leg kick. A Saffiedine head kick is blocked. Stinson scores on a leg kick. Stinson charges in and Saffiedine avoids. Another roundhouse kick to the head by Saffiedine is blocked. Saffiedine lands an inside leg kick and circles away. Saffiedine scores on a front kick to the face. They clinch with two minutes and 10 seconds remaining. Stinson lands a left elbow from clinch that stumbles Saffiedine. Stinson charges and the fight goes to the ground. Stinson attempts an armbar, but Saffiedine escapes. Saffiedine is cut near his right eye. Stinson connects on a flurry that should steal him the round with a comeback started by the elbow strike. MMA Fighting scores the close first round 10-9 for Stinson.

Round 3: 10 seconds into the round, Saffiedine lands a kick below the belt and the fight is paused to allow time for Stinson to recover. Saffiedine lands an inside leg kick. Saffiedine charges in with a strong takedown. Lots of hip movement from Stinson who recomposes full guard. Stinson works hard to escape, but Saffiedine is doing his best to remain in control while scoring points with left and right punches to the body. Referee Steve Mazzagatti, questionably, stands them up with 68 seconds remaining. Saffiedine lands a knee. Stinson connects on a left hook. Stinson stalks and Saffiedine runs out the time. MMA Fighting scores the third round in favor of Saffiedine.

Wasn't pretty. Saffiedine did what he needed to get the win once he figured out he could take Stinson down and keep him there.