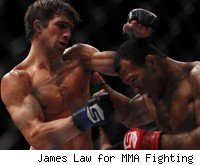 This is the Strikeforce live blog for Luke Rockhold vs. Keith Jardine, the main event of tonight's Strikeforce on Showtime event from the Joint at the Hard Rock Hotel & Casino in Las Vegas.

Rockhold (8-1) is putting his Strikeforce middleweight belt on the line for the first time after beating Ronaldo "Jacare" Souza last September by way of unanimous decision. Jardine (17-9-2) made his Strikeforce debut last April, battling Gegard Mousasi to a majority draw. Jardine will be making his middleweight debut.

The live blog is below.
More Coverage: Rockhold vs. Jardine Results | Latest Strikeforce News
Round 1: Jardine is very active, alternating between inside and outside leg kicks. Rockhold comes over the top with an overhand right. Jardine clinches with Rockhold and looks for a single-leg takedown. Rockhold turns Jardine around and scores with knees. Rockhold breaks out of clinch with an elbow. Rockhold lands a nice spinning back kick to the body. Rockhold lands a right hook. Rockhold hits the mark with a left hand. Rockhold connects with a kick to the body. Jardine's most effective strikes have been leg kicks. Rockhold drops Jardine to his knees with a right hand but Jardine quickly recovers. Rockhold hurts Jardine with a right that backs Jardine. Rockhold throws a flurry of punches and Jardine is trying to recover. Rockhold drops Jardine with right hook. More punches and finally referee Herb Dean stops the fight when Jardine goes limp.

The finish was quite the beating. Rockhold retains his Strikeforce middleweight strap.