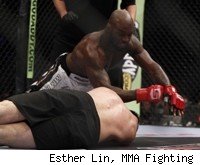 This is the Strikeforce live blog for Muhammed "King Mo" Lawal vs. Lorenz Larkin, a light heavyweight bout on tonight's Strikeforce on Showtime event from the Joint at the Hard Rock Hotel & Casino in Las Vegas.

The live blog is below.
More Coverage: Rockhold vs. Jardine Results | Latest Strikeforce News
King Mo's entrance is rather mellow, as he makes his way towards the cage with his crown on.

Kim Winslow is the referee.

Round 1: Lawal throws first, a jab that comes up short. Lawal follows with a takedown and he's on top 30 seconds into the round. Lawal pounds away with Larkin trapped against the cage. Larkin tries to scoot out but Lawal steps over into Larkin's halfguard. Larkin turns towards Lawal and eats shots. Larkin tries to sit up only to have Lawal return him to his back. Lawal carefully scores with punches. Despite Lawal staying active, Winslow has seen enough and stands them up with 66 seconds remaining. Lawal tries to fool Larkin by keeping his lead left hand by his side and his right hand up, only to shoot out his left hand. Still, Larkin avoids it. MMA Fighting scores the round 10-9 for Lawal.

Round 2: Lawal throws an overhand right to try to set up the takedown but Larkin sees it coming. Lawal shoots again and lifts Larkin's left leg high. Larkin tries to stay balanced but Lawal powers him down. Lawal peppers Larkin with punches inside the guard of Larkin. Lawal then postures up and drops down big right hands over and over (and over) for the referee stoppage.

Lawal gets up a little ticked off for what he seems to think was a late stoppage. In the post-fight interview, Lawal confirms he was upset but that Winslow explained to him that she wanted to give Larkin a chance to fight back. Lawal said he respects her decision since he would have wanted more time too if he was the one in Larkin's position.