Seven Ways of Looking at Strikeforce: Rockhold vs. Jardine 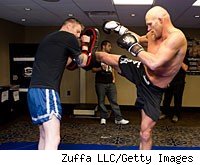 Strikeforce returns on Showtime tonight, and thanks to the free preview weekend it's available even for you non-subscribers out there. So what are you going to be looking at when you accidentally stumble onto the channel that you usually breeze right past on your way to Nat Geo Wild? Here are just a few of the major storylines and pressing concerns heading into Strikeforce: Rockhold vs. Jardine.

I. For the sake of argument, let's try and justify the decision to give Keith Jardine a middleweight title shot:

a) For starters, there's Scott Coker's 'anything can happen' defense, which suggests that because it's not impossible for Jardine to win, it must therefore be reasonable for him to get the chance. That has a certain simplistic beauty to it, but if you accept that you must also accept that any fight would, by that logic, be acceptable. Rockhold vs. a bloated Tyron Woodley? Yep, that works. Rockhold vs. a dangerously emaciated Bobby Lashley? That too. As long as we're at it, I could make 185 pounds no problem. So why didn't my phone ring with an offer, forcing me to immediately fake a staph infection? You get the point.

b) Then there's what I like to call the 'cumulative effect' defense. This argues that when you look at Jardine's entire history as a fighter -- from his 2006 TKO of Forrest Griffin to his 2007 split decision over Chuck Liddell to his recent draw with Gegard Mousasi -- it's not too shabby. And that's true. Taken as a whole, Jardine's career is pretty solid. It's just the last few years -- including the 2-5-1 record his last eight bouts -- that have been pretty dismal. But hey, if we're giving out title shots as lifetime achievement awards now, I assume Wanderlei Silva's shot at Anderson Silva must be coming up any day now.

c) Finally, the old 'he was the best we could find on short notice' defense. What it lacks in poetic flourish, it makes up for with cold, hard pragmatism. Tim Kennedy was hurt, according to Coker. Robbie Lawler was coming off two straight losses. 'Mayhem' Miller, Jake Shields, and Dan Henderson had all fled the organization, and 'Jacare' Souza just fought Rockhold back in September. Who else is left to take this fight? The answer, apparently, is Jardine. And so here we are.

II. But no matter what you think of the matchmaking, don't blame Jardine. He's been saying he wants to drop down to middleweight for a while now, and from his perspective, why not say yes to a title shot in his first fight there? He's got nothing to lose. If he wins, he's the Strikeforce champ and his career is revitalized. Even if he loses he can still earn some brownie points for making a fight out of it. Really, the only way he comes off looking bad is if he gets knocked out or submitted in the first two minutes. That's always a possibility -- the old 'anything can happen' saw cuts both ways -- but let's just say the bar is set very low for him here. He made the weight, which is a good start. Now it's up to him to see if he can't justify this bizarre matchmaking and get his name back in the news for the right reasons.

III. Luke Rockhold summed up his reaction to the Jardine fight in one word: "dumbfounded." At least he's honest. It's the kind of fight a rising young champ absolutely cannot lose. It's also the kind where he can't afford to be anything but totally and completely dominant. Basically, it's a bad fight for Rockhold, and he knows it. But hey, what could he do besides sign on the dotted line and make the best of it? As his management no doubt told him, now is not the time to be making waves in Strikeforce. Now is the time to keep your head down and win.

IV. Number that will continue to blow my mind every time I'm given a reason to look it up: 29. That's how old Robbie Lawler is heading into his 28th professional bout. How is that even possible? The guy's been a pro fighter since 2001. He debuted in the UFC in 2002. He's been doing this since back when Dana White had hair, and you're telling me he's not even 30 years old yet? If he were a Cuban Little League pitcher, no one would believe it. Lawler seems like he was born with a thousand-yard stare and a laconic nonchalance about his own ability to knock people stiff with one punch, and not much has changed over the years. He's still more or less the same fighter he's always been. His game plan for his 28th fight will probably be roughly the same as it was for his tenth. He still makes interviews more difficult than they have to be, and still has the same general disdain for all the non-fighting aspects of the fight game. At least Adlan Amagov knows what he's up against. But then, so have a lot of people who ended up flat on their backs at the end of the night.

V. Only one person can beat Mo Lawal on Saturday night, and it's Mo Lawal. I know, I know -- anything can happen -- but let's stick to what's likely to happen. He's a good enough striker that he doesn't have to dive in for a takedown right away, and yet his takedowns are such a constant threat that Lorenz Larkin will have to worry about them every time he opens up with an attack. Lawal's best chance to lose this fight is to decide to keep it standing for too long in some misguided attempt to prove a point. That would be dumb, but it also might be the kind of thing a guy with an oversized ego would do. From the outside Lawal might seem like a Ric Flair-esque narcissist, but he's actually a pretty savvy student of the game. At least, most of the time. Like most pro fighters, no matter how sober his analysis is when he's watching others, his vision gets a little hazy when he turns his focus upon himself. The only way he doesn't win this fight is if he gets to thinking too highly of his own striking skills and not highly enough of Larkin's. Even the best wrestler is going to have trouble scoring takedowns if he only shoots after he's been stung on the feet.

VI. Fun fact about Jordan Mein: seven fights into his pro career, he had a losing record. He began his pro career with a loss, in fact, to Rory MacDonald. That one must have started to look better as time went by, but Mein also dropped fights to several guys who didn't go on to become UFC standouts. After back-to-back losses at the end of 2006 and beginning of 2007, he was a very mediocre 3-4 as a pro. A lot of guys might have quit then, maybe decided to take their family's advice and finally entered that management trainee program at the rental car place. Mein kept at it, and just a few years later he's poised to take the leap from Strikeforce prelim fighter to solid undercard performer. It's almost fitting that he should take on Tyron Woodley, the former Mizzou wrestler who seemed destined for big things in MMA right off the bat, and has been groomed as such in his time with Strikeforce. You never know from its beginning what a guy's career will look like by the end. Sometimes those early struggles prove helpful later on.

VII. Know where to find Showtime Extreme in the premium cable labyrinth? If so, then you can watch the prelim bouts before the main card gets underway. While the old Strikeforce used to treat those fights as if they weren't even worth turning the cameras on for, the new Strikeforce seems to realize that you might as well do something with them, even if probably not a whole lot of people will be ignoring the Lions-Saints NFL playoff game to watch Trevor Smith and Gian Villante go at it. Still, it's a step in the right direction, as is the decision to time this event to coincide with a Showtime free preview weekend. If Showtime wants to be in the MMA business, it needs to get all the way in. Just like I first made the decision to pony up for HBO so I could watch the last season of The Wire in real time, I'll admit that I never felt the urge to get Showtime until they had Strikeforce. I can't be the only MMA fan who feels that way, so why not get behind it and push it as the asset that it is? Besides, with the avalanche of commercials that accompany any NFL playoff game, we'll have plenty of chances to switch back and forth and check on how Villante is doing.