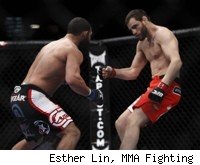 Johny Hendricks did at UFC 141 what was once viewed as nearly impossible: He finished Jon Fitch.

And Hendricks didn't just finish Fitch, he obliterated Fitch with a knockout punch that completely shakes up the welterweight division in mixed martial arts. Fitch no longer even has a claim for the No. 2 spot in the Top 10, where he has resided for years on many lists (though not on mine), and Hendricks has a strong claim not just to be in the Top 10, but to be towards the top.

So how high does Hendricks go? And how far does Fitch drop? And how does the rest of the welterweight division look at a time when Georges St. Pierre is in the midst of an extended layoff? We rank the Top 10 below.

1. Georges St. Pierre (1): GSP had demonstrated his dominance over the division so completely that even with a long layoff, he deserves to stay on the top. Unless he has a setback in his recovery from ACL surgery he's expected to face the winner of the upcoming Nick Diaz-Carlos Condit fight in the summer or fall of 2012.

2. Nick Diaz (2): Condit will be the best opponent Diaz has ever faced, but I like Diaz to win the interim welterweight title fight in February. The big question after that will be how long Diaz has to wait for his shot at GSP.

3. Josh Koscheck (4): With two losses to St. Pierre, Koscheck won't get another title shot any time soon, so he's in more of a gatekeeper role in the UFC right now. Koscheck draws Mike Pierce at UFC 143.

4. Johny Hendricks (NR): The quick knockout of Fitch moves Hendricks all the way up to No. 4 in the welterweight Top 10. As an NCAA champion wrestler who hits hard, Hendricks has the right skill set to beat St. Pierre, although he probably won't get the chance to do that any time soon. The UFC should keep Hendricks active against good competition, and if he keeps winning he'll be ready for a title shot once the Diaz-Condit winner has faced GSP.

5. Carlos Condit (5): Condit likes to stay active, so it's disappointing for him that circumstances outside his control led to him fighting just once (and for only half of one round) in 2011. He'll be chomping at the bit for Diaz.

6. Jake Ellenberger (6): The silver lining of the St. Pierre injury is that it has given new contenders in the welterweight division time to establish themselves. It used to be the case that St. Pierre was No. 1 and he had beaten all of the other elite 170-pounders. But now the division has sorted itself out to the point that Koscheck is the only one of the five best welterweights after St. Pierre has previously faced him. Diaz, Hendricks, Condit and Ellenberger would all be new opponents for St. Pierre.

7. Jon Fitch (3): Fitch fought twice in 2011, his draw with B.J. Penn and his loss to Hendricks. Once viewed as a guy who just wins and wins consistently, Fitch hasn't won since he beat Thiago Alves in August of 2010.

8. Rory MacDonald (7): MacDonald should dispatch Che Mills in March, and after that he'd make a lot of sense as a future opponent for Hendricks or Ellenberger. Someone from that group will emerge as a welterweight title contender in late 2012 or early 2013.

9. B.J. Penn (8): Penn is taking some time off following his loss to Diaz, and there's been talk that he just doesn't have the desire to fight anymore. But when he's on his game he's still one of the elite mixed martial artists at either 155 or 170 pounds.