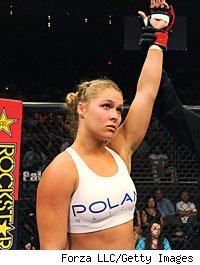 Contrary to what Miesha Tate and Sarah Kaufman may think, Ronda Rousey is officially Strikeforce's No. 1 contender female bantamweight contender.

During Saturday night's Strikeforce: Rockhold vs. Jardine telecast on Showtime, it was announced that Rousey will meet current 135-pound champion Tate on March 3. News of the fight was first reported by MMAWeekly.com earlier in the week.

The announcement comes after weeks of debate from all corners of the MMA world about who Strikeforce should match Tate up against next. In the end, matchmaker Sean Shelby chose Rousey, the former Olympic judo bronze medalist who's 4-0 as a professional and has undeniably breathed new life into women's MMA due to her bravado.

Tate (12-2) won the Strikeforce title in July when she submitted Marloes Coenen in the fourth round via arm-triangle choke. She enters the bout riding a six-fight winning streak.

While not officially announced, the fight is expected to take place in Columbus, OH.

Both Rousey and Tate appeared together on a recent episode of The MMA Hour to discuss who truly deserved a shot at the title. You can relive the episode here. As for Kaufman, she spoke to MMAFighting.com earlier this week about being passed over for Rousey. You can read her side of the story here.

In addition to the title fight, Strikeforce also announced Kaufman vs. Alexis Davis, KJ Noons vs. Josh Thomson and Paul Daley vs. Kazuo Misaki for the March 3 card, which will air on Showtime.