Hermes Franca Gets 42 Months in Prison for Sexual Abuse 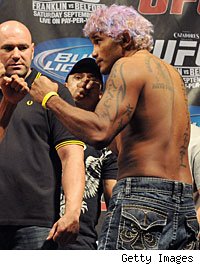 Franca, who compiled a 7-5 record in the UFC and once fought Sean Sherk for the lightweight title, has been sentenced to 42 months in prison after he pleaded guilty to sexually abusing an underage female student at his gym in Oregon.

The Oregonian reports that Franca pleaded guilty to one count of unlawful penetration and one count of first-degree sexual abuse.

After Franca is released from prison, in 2015, he will be on probation for another 4.5 years. He will also be required to register as a sex offender.

The incident with the female student took place in December of 2010. He was arraigned in May of 2011.

The 37-year-old Franca has been fighting in small shows since being released from the UFC in 2009. In his last fight, in April, he was knocked out by Thawa Ril, who has a 3-4 professional record.