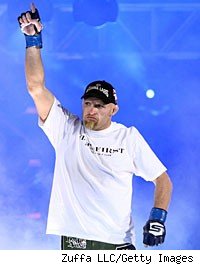 When former UFC light heavyweight contender Keith Jardine first started telling people that he wanted to drop to middleweight, the response was, shall we say, not terribly enthusiastic. He got polite nods from reporters and raised eyebrows from fans and fellow fighters. One prominent trainer who had worked with him in the past even asked me privately, "How? Is he going to cut off a leg?"

And yet, at Friday's Strikeforce weigh-ins he stepped on the scale weighing 185 pounds on the dot for his title fight against Luke Rockhold on Saturday night. Like many fighters these days, he has nutritionist Mike Dolce to thank for it.

Dolce first met Jardine in 2009 when he was helping Quinton "Rampage" Jackson prepare to fight him at UFC 96. Though they were in opposing corners then, Dolce said, "I was impressed with his professionalism leading up to the fight and the way he conducted himself as a person." So when Dolce saw that Jardine had quietly purchased his first "Dolce Diet" book -- Three Weeks to Shredded -- online, he reached out to the fighter to find out what he was hoping to accomplish.

"We spoke briefly that day and he mentioned a possible drop to middleweight at some point in his career," Dolce said. "A few weeks later he called me after hearing a radio interview I had done and said he went and did his research on me and was very impressed with my lifestyle approach to health, as well as the success of my athletes. We spoke for a few hours that night and here we are today."

When they first began the cut, Dolce said, the 36-year-old Jardine was 217 pounds "but made the statement the he was very lean and lethargic." With 32 pounds still standing between him and the middleweight limit, that wasn't a good sign, according to Dolce.

"You look at a weight cut that's 30 pounds or more and yes, that's drastic, but Keith was doing what a lot of athletes are doing: taking supplements and eating like a bodybuilder. No disrespect to those industries, but that's not what I do."

Instead, Dolce said, he got Jardine on a diet of "earth-grown nutrients" to maximize lean muscle and drop body fat. For most of his training camp for the Rockhold fight, Dolce said, Jardine was "walking around at 211 [pounds]...and in single-digit body fat levels."

After that, he said, making the weight was only a matter of "temporarily drying out those muscles" before the weigh-in, thus allowing Jardine to step into the cage on fight night back at what Dolce refers to as "the sweet weight" -- roughly the same weight he was maintaining three weeks before the fight. Thanks to his knowledge and Jardine's discipline and training, Dolce said, "the weight-cut was an easy process for us."

Doing all that with a fighter in his mid-30s who, by his own admission, hasn't been down to this weight "since my freshman year of high school" might seem risky, but Dolce insisted that it's a focus on health first that makes it possible.

"I know 25-year-old athletes who have the bodies of 45-year-olds," Dolce said. "I make sure my athletes work closely with their doctors, get regular bloodwork, and are 100 percent healthy every second of every day. Like I said, I'm a longevity advocate. My goal is for my clients to live well past 100 years old. It's nice if they make a few million dollars between their 20s and 30s, but my true objective is for them to show their great-great-grandkids pictures of their world title belts, rather than doing whatever is perceived necessary to win one."

Jardine will get his chance to take home a strap on Saturday night. By clocking in at 185 pounds he's already accomplished one feat that few people thought he was capable of. Now comes the other, slightly harder part.