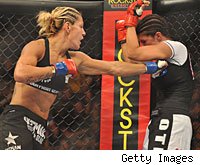 A day after the California State Athletic Commission announced that she failed a steroid test at her most recent fight, Cris Cyborg released a statement in which she blamed the positive test on a dietary supplement.

Cyborg said through her web site that she does not use performance-enhancing drugs and that the only thing she did wrong was fail to properly inspect the ingredients in the supplement she took, which she did not identify by name.

"While I was preparing myself for my last fight I was having a difficult time cutting weight and used a dietary supplement that I was assured was safe and not prohibited from use in sports competition," Cyborg said. "It was never my intention to obtain an unfair advantage over Hiroko, mislead StrikeForce, the Commission or my fans. I train harder than any fighter in MMA and do not need drugs to win in the cage, and I have proven this time and time again! My only mistake is not verifying the diet aid with my doctor beforehand, and understanding that it was not approved for use in the ring. Unfortunately in the end I suffer the consequences and must accept the responsibility for my actions."

Cyborg is far from the first athlete to blame a positive drug test on a supplement, and she surely won't be the last. It's probably the most common reason given for positive tests.

But the bottom line is that athletes have to know what they're taking or suffer the consequences, and Cyborg said she knows that.

"I would like to sincerely apologize to StrikeForce, the Zuffa organization, Hiroko Yamanaka and my fans for my failed drug test," she said. "I am ultimately responsible for everything I put in my body, and at the end of the day, there is no excuse for having a prohibited substance in my system."