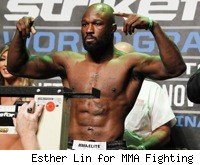 "The King" will continue to reign in Strikeforce after all.

Lawal had one fight left on his current contract, so this assures that he will fight in Strikeforce for at least five more fights. This also means that Lawal won't be moving over to the UFC any time soon.

Lawal (8-1) is 3-1 in Strikeforce. He recently defeated Roger Gracie in September to get back on track following his light heavyweight title loss to Rafael "Feijao" Cavalcante in Aug. 2010.

He recently retracted his "cancer patient" comments about Strikeforce on a recent episode of The MMA Hour and left the door open for a return to the organization.

"I've got one more fight on my contract and then my contract ends in February," Lawal said. "King Mo just wants to go where he can get paid and get paid without the check bouncing."