Strikeforce: Rockhold vs. Jardine -- By the Odds 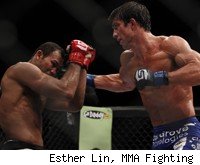 If you're tired of all those UFC events loaded with nothing but competitive fights, Strikeforce has got some good news for you. Saturday night's Strikeforce: Rockhold vs. Jardine event features no shortage of long odds and lopsided match-ups, complete with a title fight that oddsmakers seem to think will be among the biggest mismatches of the night.

Let's jump right into it and see which big underdog has just enough of a chance to convince us to do something stupid with our hard-earned cash, shall we?

Honestly, I'm a little surprised the line is this close. In Jardine's last performance he fought to a draw against Gegard Mousasi in a fight that left his face looking like a watercolor painting gone wrong. The odds for that fight looked exactly the same as they do here, and yet I can't help but feel like Jardine has even less of a chance this time. Rockhold is a better defensive wrestler than Mousasi was then, so Jardine probably won't be able to score with takedowns as easily. Rockhold's also a little more unpredictable on the feet, and I can't think that losing a significant amount of weight at this point in his career will do much to help Jardine's already suspect chin. Really, the only thing Jardine has going for him here is the fact that he has no business in this title fight at all. That means he has nothing to lose, but more importantly it means that Strikeforce is tempting the MMA gods, and they have a way of punishing matchmaking hubris like this. It would almost serve Strikeforce right if it ended up with a 36-year-old middleweight champ who had only one middleweight fight on his record. Then again, you really want to bet on a cruel twist of fate to catapult an aging journeyman over a rising young star?
My pick: Rockhold. Barring anything totally weird -- though, let's face it, some nights this is a really weird sport -- I don't see how he doesn't win this. At these odds, it's prime parlay material.

Amagov may not be a household name in MMA just yet, but believe me when I tell you that he's no joke. He can grapple and he can bang, and his record reflects both. But then, there's a big difference between fighting Ronald Stallings and fighting Robbie Lawler. It's easy to look at Lawler's record and come away thinking that the hard-nosed brawler is falling off. He's lost four of his last six, after all, and he's currently on a two-fight skid. Then again, look at who he's been losing to: Tim Kennedy, "Jacare" Souza, Renato Sobral, Jake Shields. Any one of those guys would be the test of Amagov's young life, but for Lawler it's just a normal couple of years. That experience matters, as does Lawler's ability to knock your fondest childhood memories out of your brain with one punch. Amagov is a serious fighter and he may be on his way up the ranks, but he's never fought anyone quite like Lawler before. As long as Lawler doesn't let that fact go to his head, he should bounce back here.
My pick: Lawler. Assuming he's more or less healthy and doesn't fight a dumb/reckless fight, I like his chances to find Amagov's chin sooner or later.

On paper, Larkin looks like an impressive fighter, but it's what you don't see on his resume that could make all the difference. He might be undefeated in MMA, but he's lacking two things: 1) a serious wrestling pedigree, and 2) experience against high-level opponents. Lawal has both, which should help explain why he's such a heavy favorite. The question here is whether Lawal will approach this fight with the right temperament, or whether he'll let his considerable ego get the better of him. His striking has come a long way in recent years, but that doesn't mean he has to rely on it here. He can probably take Larkin down at will beat him up on the mat; he just has to believe that this is the right way to go and stick with it. Reasons to think he'll do that: Lawal's no dummy, and the AKA crew he's working with knows how to put together a game plan and drill it into a fighter's head. Reasons to think he won't: Lawal is a showman, and he's got just enough of a chip on his shoulder to want to do whatever his haters think he can't.
My pick: Lawal. It's entirely possible that he could get himself into a boxing match that doesn't favor his skill-set, but even then he always has wrestling to fall back on. I'll put him right next to Rockhold in the parlay.

As anyone who saw him turn on the go-go-gadget elbows against Evangelista Santos already knows, Mein is for real. He's got a six-fight win streak going, and the last few have come against increasingly challenging opponents. Woodley, however, represents a different kind of test altogether, and it's the variety that Mein has yet to prove he can pass. We all know what the former Mizzou wrestler brings to the table. His stand-up game might be coming along, but it's not what he relies on to win fights, as his takedown-heavy performance against Paul Daley showed. Mein has shown in the past that he can be outwrestled, but Woodley's shown that he doesn't always have much of a plan B when he faces someone who can stuff a takedown or two. The line here seems to suggest that Woodley will stomp all over Mein, but I'm not sure that's the case. If Woodley wins, it'll probably have to be via decision. That gives Mein plenty of opportunities to figure something out and exploit an opening. Or maybe it just gives him plenty of chances to get taken down.
My pick: Mein. Of all the big underdogs on this card, he's the one with the best chance to surprise some people. Woodley has looked a little too one-dimensional lately, and Mein is undervalued. That's all a riverboat gambler like me needs to know.

Saffiedine is one of those fighters that Strikeforce has been grooming in its Challengers shows for a while now, but those days are done. He looked solid while out-pointing Scott Smith in his last outing, but his game is not without its holes. The question is, can Stinson exploit those holes before Saffiedine goes upside his head with a flashy combo? Probably not. Stinson's been in with some tough customers during his time, and he's come away with wins over a few of them. Still, Saffiedine seems more polished. Anybody who has a 15-second knockout of Eduardo Pamplona on his record -- as Stinson does -- needs to be taken seriously. But if Saffiedine plays it smart and keeps this from turning into a streetfight, he should take this.
My pick: Saffiedine. I'll admit that I was tempted to leave Mein alone and take Stinson as my big underdog, but I just don't see it here. He's been too up and down, and the ups haven't been quite high enough to make me a believer yet.

The 'For Entertainment Purposes Only' Parlay: Rockhold + Lawler + Lawal.