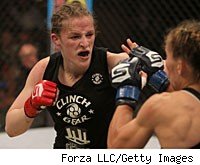 Sarah Kaufman saw the internet reports of a Miesha Tate-Ronda Rousey title at about the same time the rest of the MMA world did. She wasn't terribly surprised, she told MMA Fighting on Thursday, but neither was she particularly pleased.

"I think it's terrible news," the former Strikeforce 135-pound women's champ said, and you can probably guess why.

"I put in my time and, being the former champ and having had two fights since the only loss of my career, I've definitely earned the right to fight Miesha Tate and fight for the 135-pound title with Strikeforce," Kaufman explained. "Then there's Ronda, who's only been fighting for a year. Granted, she has her judo experience, but she hasn't fought anyone of a high caliber. She's fought at 145 pounds -- hasn't even competed at 135 pounds at all -- and for her to be given the opportunity to fight for the title, it's pretty ridiculous."

The good news, if there is any for Kaufman, is that the fight is not yet official. Though first reported by MMA Weekly on Wednesday evening, both Tate -- the current 135-pound women's champ -- and the unbeaten Rousey took to their Twitters to explain that the rumored March 3 title fight wasn't yet signed. Kaufman said she was still holding out hope that her phone might ring with a fight offer before Rousey's does, but noted that "usually when rumors happen it's for a reason."

The way Kaufman sees it, if Rousey has earned herself a title shot in any division it's the 145-pound class, where most of her professional bouts have taken place. That Rousey is angling for a shot at Tate rather than at Strikeforce 145-pound champ Cristiane "Cyborg" Santos can only mean one thing, Kaufman said.

"She's scared to fight Cyborg, for sure, and understandably. Cyborg is a formidable fighter. But if you're saying you want a title, it shouldn't matter whether it's at 145 [pounds] or 135 [pounds]. Now she's backpedaling and saying, 'Oh, I want Cyborg to come to 135.' Or maybe she'll do it as a catchweight. Or maybe in four or five fights. She's pretty much just pushing the fight off, clearly running from it."

Kaufman's not the only one to question whether Rousey deserves a crack at the title. Tate had a memorable confrontation with the Olympic bronze medalist in a recent episode of The MMA Hour, during which Tate accused her of trying to leverage her looks for an opportunity she hadn't earned in the cage.


"It's frustrating to see," Kaufman said. "Gina [Carano] is a prime example, but she didn't push her own looks. Everyone else pushed her looks, and she fought. She had good fights that she looked impressive in. Miesha's been a little bit the same. She's definitely pushed her looks and marketed herself in that manner, but she's also put her time in and worked her way up in the fighting game. Ronda's just the opposite. She's had a couple impressive wins, and really fast, and then just told people, 'I'm pretty so I deserve it.'"

While there's no official word on whether Rousey will get the next shot at Tate, all signs seem to be pointing in that direction, and even Kaufman seems resigned to it. She might have nearly four times as many fights as Rousey, and five years more experience in MMA, but with the fickle nature of the women's division she knows that doesn't guarantee her a title shot. What she's left wondering is, what will?

"I've been pushing for the Miesha fight since I fought her," said Kaufman. "That's all I can do, is get in interviews and say what I think, which is that I deserve the fight. Maybe that's not what they want to hear. They want to hear, 'I'm the prettiest and you can market me and sell me to guys.' That's not my thing, and I won't do that. I'll present myself as an athlete and be feminine in my own way without being over the top."