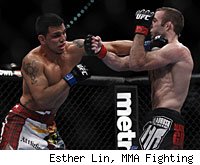 Two former Ultimate Fighter winners are set to clash at UFC 124 in Montreal on March 24.

Mac Danzig, who won Season Six of The Ultimate Fighter, and Efrain Escudero, who won Season Eight of the UFC's reality show, are set to square off in a lightweight bout, the UFC announced on Thursday.

Danzig will be fighting for the first time since losing to Matt Wiman on Oct. 1. That loss was Danzig's fifth in his last seven fights, and there was some talk that Danzig would be released from the promotion. But he'll get at least one more shot to prove he belongs in the Octagon against Escudero, who's also on thin ice with the UFC: Escudero was released by the UFC in 2010 before getting another chance at UFC 141, where he lost to Jacob Volkmann. The loser of Danzig-Escudero is probably done in the UFC.

The Danzig vs. Escudero fight is one of several the UFC announced on Thursday.

-- UFC 145 will also feature Matt Wiman vs. Mark Bocek in a lightweight fight.

-- Shane Roller will take on Michael Johnson as part of the UFC on Fox 2 undercard. Johnson had been slated to face Cody McKenzie, but McKenzie dropped out with an injury and Roller has taken his place.

-- T.J. Dillashaw will return to the Octagon for the first time since losing to John Dodson at the Ultimate Fighter 14 Finale when he squares off with Walel Watson at the UFC on Fuel event on February 15. The same card will feature a featherweight fight between Jonathan Brookins and Vagner Rocha.

-- Dustin Poirier has a new opponent for UFC 143 after both Erik Koch and Ricardo Lamas dropped out with injuries. Poirier will now face UFC newcomer Max Holloway.

-- Jake Hecht will face T.J. Waldburger at UFC on FX 2 in Australia.