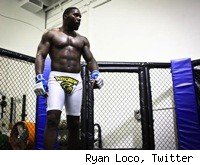 Anthony Johnson is considered to be one of the top welterweights in the UFC, but his days of fighting at 170 pounds may be over.

"Rumble," who will make his middleweight debut against Vitor Belfort at UFC 142 next week, said on a Wednesday conference call that he isn't thinking about fighting at welterweight anymore.

"Right now, middleweight is where I am," Johnson said. "That's all I'm thinking about, and I really don't mind fighting middleweight because I get to eat more now. So like I said, I feel 1000 times better than I did when I fought [at] 170, so that's why I'm so happy and want to fight really bad."

Johnson, who said he currently weighed 215 pounds, would sometimes cut as much as sixty pounds to make the 171-pound welterweight limit. He even missed weight twice (UFC 76 and UFC 104), but despite the struggle to make weight, he never seriously flirted with the idea of moving up to 185 pounds.

That is until the UFC offered him a shot against Vitor Belfort in Rio de Janeiro, Brazil.

"This is going to be a lot of fun for me," Johnson said. "So that's why I feel so good because I don't have to cut the weight that I used to cut and I'm more explosive; I'm more athletic. Everything has just come to where it needs to be right now. I'm peaking at the right time."

Asked whether he was officially done as a welterweight, Johnson simply said, "so far."

UFC 142, headlined by Jose Aldo vs. Chad Mendes for the UFC featherweight title, airs live on pay-per-view from the HSBC Arena in Rio on Jan. 14. The prelims will air on FX.