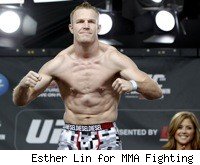 Papy Abedi is scheduled to meet James Head in a welterweight bout at the UFC's debut in Sweden on April 14, MMAFighting.com has confirmed with sources close to the fight.

Abedi's involvement on the card is an obvious one, considering he currently fights out of Stockholm, Sweden. Abedi grew up in the Democratic Republic of Congo, France and Belgium before moving to Sweden in 1997. The 33-year-old lost his Octagon debut to Thiago Alves via first-round rear-naked choke at UFC 138 in November. The loss marked Abedi's first in nine professional MMA bouts (8-1).

The fight will mark Head's first at 170 pounds since signing with the UFC last year. The 7-2 Head dropped his Octagon debut to Nick Ring at UFC 131. He was supposed to fight John Maguire at UFC 138 but an injury forced him to pull out of the bout.

The card, which will air on FUEL TV, will take place at the Ericsson Globe Arena in Stockholm, Sweden. The rest of the card has yet to be announced, but Swedish fighter Alexander Gustafsson, who defeated Vladimir Matyushenko at UFC 141, has publicly stated that he would love to fight in his home country.