In Strikeforce, Even Champs Face Difficult Questions in Confusing Times 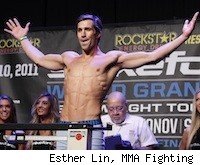 You can't exactly call Strikeforce middleweight champ Luke Rockhold and former light heavyweight champ Mo Lawal disgruntled, but neither can you call them satisfied. As they sat down alongside Strikeforce's Scott Coker for a little pre-fight Q&A with media members in Las Vegas last week, they did not seem like men who were thrilled about the state of their careers.

Instead, they seemed more like people who were making the best of a bad situation. They were dealing with it. They were getting by. They didn't have much choice.

It's a tough time to be a Strikeforce fighter. If you complain too loudly about being stuck in Zuffa's second-tier organization, you risk the wrath of an upper management that is still trying to pretend that it's a first-tier organization. If you stay too quiet, you risk becoming the closed mouth that never gets fed a top contender.

As Rockhold put it when he made the case for bringing some UFC fighters over to compete in Strikeforce: "You don't want to get distracted from what you're doing, but you've got to try and build those fights and let people know that we're legit."

Especially when you examine the alternatives, you have to admit that he has a point.

Take Rockhold's current situation, for example. He's the new 185-pound champ after taking the belt from Ronaldo "Jacare" Souza in front of a depressingly small crowd in Cincinnati this past fall. Now, for his first title defense, he gets journeyman fighter and UFC castoff Keith Jardine in a January 7 bout that will mark Jardine's debut at 185 pounds. If Rockhold does nothing -- if he plays the role of the quiet company man and acts like he's happy to be taking a fight that can do almost nothing positive for his career at this point -- where will that leave him?

When talking to reporters, Rockhold did his best to put a positive spin on the match-up, but even he had to admit that it was "far-fetched."

"I was definitely just dumbfounded by that one," Rockhold said. "It didn't make much sense. But I started to think about it outside of the box a little bit, and this is my first main event. He does have a big name, so it brings some name value to the card, and it'll bring some eyes and some ears to the card. Me beating him will show me to the rest of the public."

That is, if the public is watching. The last time Rockhold fought was at the "Barnett vs. Kharitonov" event in September, which even Coker said was "something that I would say is below what would be acceptable for our standards" as far as the live gate went. The event featured a night full of great fights, but both Showtime and Zuffa took a hands-off approach to promoting it, resulting in a dismal rating on the TV side and an embarrassing live crowd.

Most fighters will tell you that stuff like low ratings and empty seats don't bother them; they're simply there to fight and win. But then, most fighters feel compelled to lie about things like that, if only to avoid making their employers look bad. One fighter who rarely feels such an obligation is "King" Mo, who also notched a victory on that same fight card in Cincinnati, and who has never shied away from some real talk.

"When I fought for the belt on CBS I thought, okay, people are going to be watching," Lawal said. "When [Rockhold] was fighting 'Jacare' people didn't give him a chance, but I thought it may be the perfect time to promote this fight, as well as Daniel Cormier and the guys in the heavyweight tournament, so the world could see the talent we have in Strikeforce and they could see my boys at AKA do some work. When I saw the arena I was like, man, this is a joke. I was kind of mad."

Maybe anger is the only rational response. After all, the fighters at or near the top of the Strikeforce organization are elite, proven athletes. If guys like Rockhold and Lawal were free agents whose contracts had just expired in an organization Zuffa didn't already own, you better believe the UFC would be eager to snatch them up and inject some new blood into the middleweight and light heavyweight divisions. But because Zuffa has a contract with Showtime -- and because Showtime seems to want to continue airing Strikeforce, though without putting significantly more effort into making it a success -- some quality fighters are stuck playing to smaller crowds and taking on lesser-known opponents.

Coker -- ever the optimist when it comes to the brand he built from the ground up -- stressed the benefits that Showtime's free preview weekend could bring to this card, noting, "Instead of being in 20 million homes...you're going to be in 70 or 75 million homes."

Then again, with a 10 p.m. ET start time on Saturday, you're also going up against the end of the Lions-Saints NFL playoff game that starts at 8 p.m. ET. You're also sandwiched between a UFC pay-per-view and frantic streak of UFC events that runs all the way through January and February before pausing for a breath. If you're an MMA fan -- even a hardcore fan who knows enough to know why Rockhold-Jardine is an odd pairing for a main event title fight -- you're probably more likely to sit out a Strikeforce event than you are to miss Carlos Condit-Nick Diaz or the UFC on FOX.

This is just one of many problems for Strikeforce fighters. As the UFC cranks up the dial on its own events schedule from 'intense' to 'insane,' something's got to give. It's only reasonable that Strikeforce would be the first to get thrown overboard when resources get scarce. The top fighters will quickly run out of top opponents, and the public will continue to regard the UFC champs as the de facto MMA champs. Meanwhile, all Rockhold can do is beg for the UFC to send him a contender and let him prove himself, but without annoying the powers that be in the process.

"All the top ten guys or whatever are in the UFC," Rockhold said. "I'd love to see some of the guys jump over, because I don't think we get enough credit in Strikeforce. I think we've got 'Jacare,' me, and [Tim] Kennedy -- I think all three of us can beat anybody in the top ten. I think if they want to build Strikeforce...a huge thing would be to bring over a top contender from the UFC and throw him in the mix here with all of us."

Of course, when you pan over to Coker for his response on the likelihood of any of that happening, you get an answer that tells you everything you need to know: "You have to talk to Dana about that one."

And Uncle Dana, if you haven't noticed, is sort of busy with this whole UFC thing at the moment. Strikeforce fighters? They can leave a message at the beep.