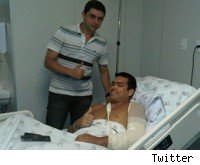 Lyoto Machida recently had successful left elbow surgery, and moments after the procedure, he took to Twitter to lay down a challenge to the loquacious Chael Sonnen.

"Chael Sonnen, I just had surgery but I can still give you your present in the octagon with just one arm. All you have to do is accept," he wrote.

Machida, who is coming off a light heavyweight title loss to Jon Jones at UFC 140, perhaps saw or heard about Sonnen's recent remarks on a FUEL TV promo clip. It was part of the "UFC Tonight" show that airs Tuesday night at 10 p.m. ET, suggesting some mouthwash for the former light heavyweight champion, who drinks his first urine of the day. If not, he may have heard one of the other countless shots Sonnen has taken about him or his country mates over the past couple of years.

Machida's response is notable because, in the past, Sonnen's Brazilian targets, most notably Anderson Silva, have chosen to ignore his remarks or simply take the high road when asked about them.

"I don't have time for 'pee pee' mouth," he tweeted. "All the time I can spare him is enough to cold cock him and walk away."

As for the elbow surgery, Machida's second, "The Dragon" wrote that it "went very well."

Sonnen returns to action on Jan. 28 against Mark Munoz. A win would earn him a rematch against the middleweight champion Silva.