Hominick vs. Yagin, Bocek vs. Wiman Slated for UFC 145 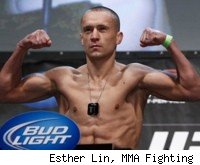 Canadians Mark Hominick and Mark Bocek will play host to Eddie Yagin and Matt Wiman, respectively, at UFC 145 on March 24 at the Bell Centre in Montreal.

The UFC announced Tuesday that verbal agreements are in place for the two bouts.

Featherweight Hominick (20-10) will look to end a two-fight losing streak that began with his unsuccessful title challenge against Jose Aldo in April 2011 and extended with a seven-second knockout loss to Chan-Sung Jung last month.

Yagin (15-5-1) is a Filipino-American out of Hawaii who fell short in his UFC debut last September against Junior Assuncao.

In 2011, Toronto's Bocek (9-4) fought to a decision loss against lightweight title contender Ben Henderson and then bounced back with a win over Nik Lentz.

Wiman (14-6) has won four of his last five fights and in his most recent fight in October, earned a decision over Mac Danzig.