Rolles Gracie to Face Bob Sapp at One FC 2 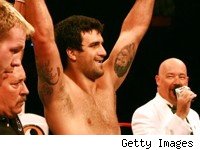 One-time UFC competitor Rolles Gracie will aim to extend his win streak to three when he faces former Japanese MMA superstar Bob Sapp at One FC on Feb. 11 in Jakarta, Indonesia.

Gracie announced the matchup late Sunday and Sherdog.com was first to report of the matchup.
All five of Gracie (5-1)'s MMA wins have come by either an arm-triangle choke or a rear-naked choke. In February 2010, Gracie made his UFC debut at UFC 109 and was released shortly after the disappointing loss to Joey Beltran. In 2011, he scored first-round wins by arm-triangle choke against Braden Bice and Lee Mein.

More than ever, Sapp (11-9) in recent years has been fighting strictly for the paycheck. He lost all of his fights in 2011 (three in MMA and three in kickboxing) and has dropped seven of his last nine MMA fights. Outside of his epic fight against Antonio Rodrigo Nogueira in 2002, all of Sapp's MMA fights have ended in the first round.

ONE FC held its inaugural event last September in Singapore and in November announced a partnership with DREAM to co-promote and exchange fighters.